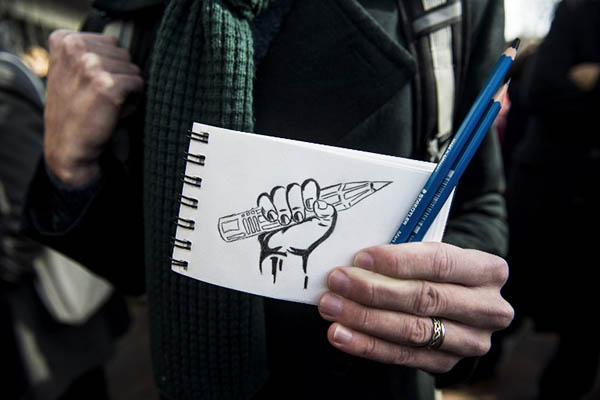 A prominent U.S. literary society devoted to freedom of expression is to honor French satirical magazine Charlie Hebdo with an award at a New York gala in May.

PEN American Center said that Charlie Hebdo film critic and essayist Jean-Baptiste Thoret would accept the award for freedom of expression on behalf of the magazine on May 5.

Two brothers on Jan. 7 stormed into the Charlie Hebdo offices in Paris, killing 12 people and claiming to avenge the magazine’s depiction of Islam’s Prophet. Eight magazine cartoonists and journalists were among the dead.

Staff members refused to be cowed and released a “survivors” issue a week after the attack, which sold a record eight million copies.

PEN executive director Suzanne Nossel said it was for satirists in any free society to challenge the powerful and the sacred, to “make expression freer and more robust for us all.”

“In paying the ultimate price for the exercise of their freedom, and then soldiering on amid devastating loss, Charlie Hebdo deserves to be recognized for its dauntlessness in the face of one of the most noxious assaults on expression in recent memory.”

PEN said Thoret, who escaped the attack by arriving late to work that day, would accept the PEN/Toni and James C. Goodale Freedom of Expression Courage Award on behalf of his colleagues. The gala will also honor British playwright Tom Stoppard with its highest award for his glittering, decades-long career and commitment to the defense of creative freedom worldwide.

In the 1970s and 80s, Stoppard drew attention to the plight of political dissidents in Eastern and Central Europe, and has also campaigned for oppressed artists in Belarus, PEN said. Past winners of the same award include Salman Rushdie, Philip Roth, Michael Ondaatje and Gore Vidal.

Founded in 1922, PEN American Center is a community of 4,000 U.S. writers and works to defend global freedom of expression.

Coalition Government Does Not Believe in Restricting Free...