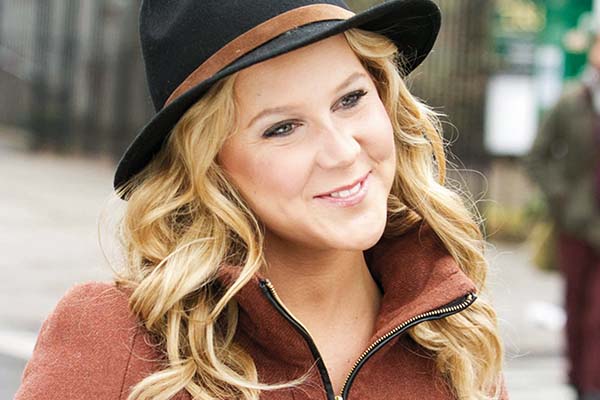 The rising comedian is besting her Comedy Central competition.

[dropcap]T[/dropcap]here are many moments that Amy Schumer will remember fondly from the lead-up to the debut of Inside Amy Schumer, the Comedy Central series that she writes, produces, and stars in. There was the time her sister grabbed an issue of Glamour from a newsstand and she got to say, “Oh, I’m in that one.” Being interviewed by David Letterman was a dream come true, and the gaggle of men who shouted that they loved her on a street in Manhattan’s Chelsea neighborhood was a trip. But the moment she may cherish forever is when she was lying underneath a bed in a hot room as her friend Kurt Metzger, also a writer on the show, and his girlfriend pretended to have sex above her.

The bit, called “POV Porn,” imagines what pornography would look like if it were shot from a woman’s perspective instead of a man’s—and how unsexy that would be: glimpses of a hairy chest and a heaving, squinting, perspiring man grunting from above. It ended up being one of the defining sketches in the first season of Inside Amy Schumer, which wrapped up July 2. When the show debuted, the coverage of Schumer as comedy’s next big thing compared her with more established and equally raunchy, sexual, and edgy female comedians like Sarah Silverman, Chelsea Handler, and Whitney Cummings. But over the course of the first season, Schumer, 32, set herself apart from her contemporaries by mastering a uniquely female point of view. As “POV Porn” shows, she’s less interested in making a joke for the shock value of a woman saying something dirty or, worse, to appeal to men. Instead, Schumer delivers astute observations about what it’s like to be a woman—and the imperfections and insecurities associated with it—and dares to say that it’s OK to laugh at that, too. In doing so, she’s made an astounding discovery: men are just as happy to laugh alongside women, and that we can all be in on the same joke.

Despite being filled with humor that’s very “girl’s girl” on a network that’s very “guy’s guy,” Inside Amy Schumer scored higher premiere ratings than Comedy Central’s two other new shows, The Jeselnik Offensive from Anthony Jeselnik (whom Schumer used to date) and Kroll Show from Nick Kroll, both featuring male comedians. Her show’s rating among men aged 18-34 beat the fellow frosh comedies by 16 and 12 percent, respectively, and Inside Amy Schumer has been renewed for a second season. Looking at the list of Comedy Central’s biggest hits over the years—with titles like The Man Show—it comes as no surprise that its biggest demographic is young men. “Men watch Comedy Central, so we knew they would show up,” Schumer says. Whether those men would stick around was a question mark, one that has now been answered by the positive ratings. It’s a fact that makes Schumer’s rise as the channel’s newest breakout star all the more remarkable. But getting men to tune in wasn’t Schumer’s only goal for the show. “I wanted women to make their way over to the network,” she says. “I think the show is something that chicks would really enjoy.”

Mia Farrow regularly tweets about how much she enjoys the show. Positive 140-character reviews from Courtney Love and Diddy are even used in Comedy Central’s promos.

Schumer, who’s from Long Island, New York, has been a regular on the stand-up circuit for eight years. She first made a splash competing on the reality show Last Comic Standing in 2007, where she finished in fourth place. She’s had small parts in shows like 30 Rock over the years and more recently Girls, but Schumer counts her 2012 Comedy Central special, Mostly Sex Stuff, as her biggest break. It was around that time that it occurred to her that this thing she was doing that seemed so natural to her—talking about sex, because, you know, she has it—was actually a big deal. The kind of big deal she wanted to keep doing. “It occurred to me that maybe I’m giving some women a voice,” she says. “This didn’t exist for me when I was younger. I would’ve loved to have this girl who looked like somebody’s older sister saying that I hooked up with this guy and he totally kicked me out right after, but make it funny and make a point about how we can all laugh at ourselves and feel a little less pain and humiliation.”

Take, for example, the Inside Amy Schumer sketch in which Schumer has a one-night stand and the next day begins sampling wedding cakes and picking out adjoining burial plots. The guy? When she calls him, he doesn’t even remember her name. Or, there’s the one where a group of girlfriends meets at a street corner, each completely incapable of accepting a compliment another is giving her. “Look at your cute little dress!” one coos. “Little?” the friend responds. “I’m like a size 100 now. Anyway I paid like $2 for it. It’s probably made of old Burger King crowns.” It goes on like that until one of the women being complimented simply responds, “Thank you.” The rest of the group is so taken aback they commit mass suicide on the street. Another sketch has Schumer playing a woman who receives a talk-show makeover. When the show’s host visits her months later, she discovers that Schumer’s character loved the makeover so much that she hasn’t showered, washed her hair, or changed clothes since receiving it.

But don’t mistake Schumer’s send-ups as finger wagging or tsk-tsk-ing. “Women, especially, I want to feel nurtured,” she says. “I feel like I have the capability to help some women feel empowered and a little more liberated,” the idea being that we ought to laugh at these situations loudly and openly not out of a sense of shame but because they’re legitimately funny.

The first season of the show has earned Schumer a wide range of fans. Louis C. K. congratulated her on a Letterman appearance. Mia Farrow regularly tweets about how much she enjoys the show. Positive 140-character reviews from Courtney Love and Diddy are even used in Comedy Central’s promos. “She’s brilliant, hilarious, and has such a defined point of view,” raves Brooke Posch, a programming and development executive at Comedy Central. Even Schumer’s parents, who could understandably be not so into the idea of their daughter talking about her favorite dildos on national TV, are over the moon about the show. Her father, who has multiple sclerosis and lives in a hospital, got Comedy Central just to watch his daughter each week.

Still, inside Schumer there is something that, through jokes about sex with clowns and body insecurities, she struggles to say. Her own brand of humor, which wrestles with inclusion and appealing to both genders, is an extension of that. “I do feel like I really need to toe a line and be careful not to make men feel alienated,” she says. And doing that in comedy’s boys’ club isn’t always easy. There was that time, for example, she defended comedian Daniel Tosh during the media uproar over jokes he made about rape by tweeting “Team Tosh”—later telling Newsweek that jokes like Tosh’s “have been happening since I started stand-up.” But as the celebratory response to the first season of Inside Amy Schumer proves, Schumer’s is a voice that a lot of us want to—and should—hear more of. “Do I want women to watch and am I sending a message? My instinct is a little bit to whisper ‘yes,’” she says. “That doesn’t seem like something you’d have to whisper, but it really is.”