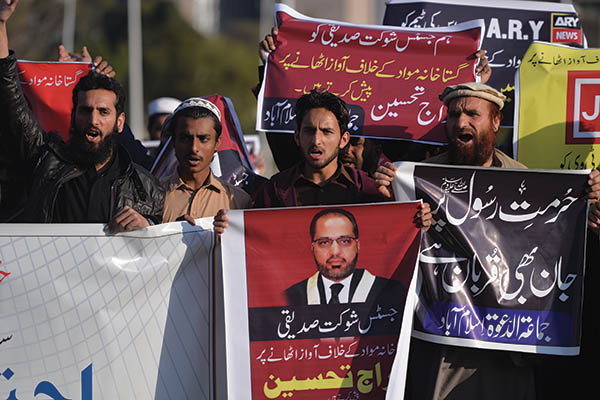 The latest development in the attempt to chase shadows came a day before the Ides of March with the National Assembly resolving, unanimously, to form a 10-member committee to investigate just who is putting out the blasphemous content being circulated on social media platforms.

Nothing surprising about the unanimity on the issue, given the sensitivity of it, even though it is unclear whether most, any or all of the National Assembly members had, or have, seen the content they were resolving against.

Earlier, Justice Shaukat Aziz Siddiqui of the Islamabad High Court had summoned officials from the Pakistan Telecommunication Authority, Police, Federal Investigation Agency—and even the Interior minister. It seems that when they appeared, the judge took them to his chamber and showed them the blasphemous content. He is reported to have blasted the PTA chairman when he tried to inform the court of the impossibility of filtering one billion social media pages. For good measure, the judge also informed the officials lined up before him that if the government doesn’t do anything, people like Mumtaz Qadri—Gov. Salmaan Taseer’s assassin—would continue to take the law into their own hands.

Be that as it may, it is quite clear that the government has been put on the backfoot. Interior Minister, Chaudhry Nisar Ali Khan, who didn’t personally appear before the court, was prompt in putting together a presser and assuring everyone that his ministry and its subordinate law-enforcement bodies were seized of the matter and, God willing, will not sleep until they had swatted the vermin in question. The matter has reached the point where Prime Minister Nawaz Sharif has had to issue a statement condemning blasphemous content on social media and vowing action, though he did caution against netting any innocent people. The government, it seems, wants to make the right noises to ward off pressure and not be seen as soft in its approach.

The issue was reportedly brought before the court through a petition filed by Salman Shahid, son-in-law of Lal Masjid’s Abdul Aziz, the controversial mosque which saw military action in 2007 and whose prayer leaders have, on more than one occasion, spoken in favor of the terrorist groups the state has been fighting. The mosque also has the distinction of putting out at least one video in favor of Daish. This has not been one-way support, though. The Pakistani Taliban and its affiliated groups, as also Al Qaeda, on a number of occasions but especially after the 2007 operation against Lal Masjid gave statements in favor of the mosque and vowed to attack the state and security forces to avenge the operation. And they did.

The recent wave of terrorist attacks by Jamaat-ul-Ahrar has been codenamed Operation Ghazi by the group in a reference to Ghazi Abdur Rashid, younger brother of Abdul Aziz, former khateeb of the mosque. Rashid was killed in the 2007 operation. More interestingly, a statement purported to be from Ahrar and recently carried by the media, praised Justice Siddiqui for his prompt action on the issue of blasphemy and the orders he had given to the government. Interestingly also, Lal Masjid, for the past two years has been under pressure from activists who have constantly petitioned the government against actions and statements by its leaders and also managed to file at least one First Information Report against Abdul Aziz.

The country has also launched another operation, Radd-ul-Fasaad, in the wake of a string of terrorist attacks and questions have been raised about the government’s inability, unwillingness or both to deal with the narrative put out by terrorist groups and their sympathizers. It is somewhat interesting that the current talk about blasphemous material seems to dovetail with whatever half-baked measures that the government was taking toward a counternarrative.

One point is amply clear to those who observe and study the strategies employed by rightwing religio-political groups and also terrorist groups: use religion and religious sentiments and constantly push that narrative to suppress rational voices. Religio-political groups do not indulge in violence directly, but the narrative gives space to violence-prone groups and also to individuals and lynch mobs. The victims are the very voices the state needs if it wants to turn the situation around, develop a counternarrative and stem the rising tide of extremism, extremist action, and violence.

Put another way, no one condones blasphemy. If there is such material, the government must investigate the issue and determine its veracity. The bigger problem is about the ideological space captured by the very people the state is fighting against and the withdrawal from the fight of those who are the state’s natural allies in this war.

It is a matter of empirical evidence that a majority of blasphemy cases are based on mala fide. The criminal justice system at every step must, therefore, be very cautious in dealing with them. That would require setting emotion aside and performing the function of dispensing justice on the basis of due process rather than on the basis of how those handling the issue are predisposed to it. Vigilante action in such cases has been a major problem even when the criminal justice system has taken cognizance of complaints and accusations. For instance, a former judge of the Lahore High Court who quashed the death sentence of a blasphemy accused was murdered in his chamber by a zealot who didn’t agree with the application of law and evidence in the case. Advocate Rashid Rehman was killed for simply representing an accused who had the right to a counsel in his defense. Examples abound.

The point is simple: blasphemy accusations are often about issues other than blasphemy. Two, the state, if it wants to win this war, will have to deny space to elements who breed in this space. If the state tucks tail and runs every time someone or a group invokes religion or religious sentiment, it stands a cat’s chance in hell of countering this existential threat.

Making a charge at social media pages will open up floodgates of accusations. The virtual world is full of tricks, illusions, and fake news. In addition to creating fake accounts, genuine accounts can be hacked and run maliciously by hackers who can change the content and deface the pages. Any investigation must have first-rate experts in digital forensics to determine guilt or innocence. This is crucial because people trying to settle scores can and will put up fake pages in the names of those they want to settle a score with. The criminal justice system at all levels should be cognizant of this. Its functioning must be informed by experts. If the system is not sensitive to the trickeries of digital space and how it can be manipulated, we could end up with a lot of hate and hurt in these post-truth times. Nw

Haider is editor of national-security affairs at Capital TV.