Chaudhry Nisar Hits Out at Modi 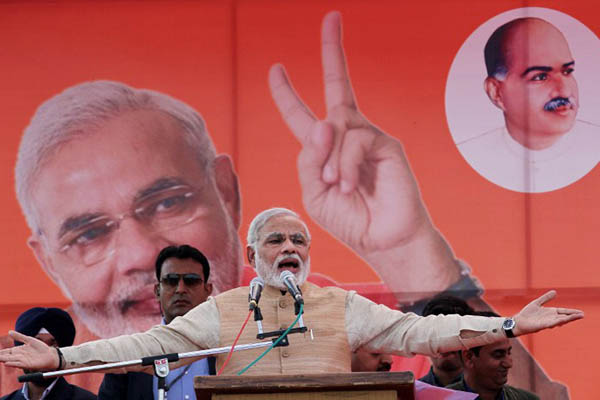 Interior minister Chaudhry Nisar Ali Khan on Tuesday hit back at Indian election frontrunner Narendra Modi after the latter claimed in an interview that he would ensure terrorist Dawood Ibrahim was recovered from Pakistan and brought to justice.

In an interview with a Gujarati news channel, the Bharatiya Janata Party (BJP) leader said that if he won the elections, he would ensure that the fugitive Ibrahim would be brought back to India. His supporters have echoed the statement, claiming a targeted operation could be used to capture the underworld figure.

Denying that Ibrahim was in Pakistan, Khan condemned Modi’s statement, adding it was irresponsible. “First Modi should find out where Dawood Ibrahim is living and then worry about attacking Pakistan,” he said in a statement. “It appears that Modi has not learned from his shameful mistakes … while chief minister of Gujarat,” he said.

In 2002, hundreds of people, mostly Muslims, were killed and thousands more injured after sectarian riots broke out in the Indian state of Gujarat. Modi, the chief minister of the state at the time, has been accused of fomenting the violence but has been cleared of complicity by the Supreme Court of India.

“Such provocative and condemnable statement of expected Prime Minister of India and leader of major political party is touching the last limit of enmity toward Pakistan,” Khan added. He said that if Modi continues to make such “irresponsible” statements, then he could destabilize regional peace.

“Those who are giving statements that Pakistan is sheltering Dawood Ibrahim and suggesting launching military operations on Pakistan’s soil should realize that Pakistan is not a weak country to be afraid of such threats,” he said. “The Pakistani leadership, people and particularly armed forces have the right and power to reciprocate the expression of sentiments coming from across the border,” he warned.

Ibrahim, declared a ‘global terrorist’ by both the U.S. and India, has long been rumored to be hiding in Pakistan. However, Islamabad has repeatedly denied these allegations.

Even before becoming PM modi has sent shivers down the pakistani spines.nisar should understand it is election time and politicians do make such statements, for nisar to get personal shows his lack of understanding and experience.modi has got more sense in the tip of his little finger , than pakistan’s full cabinet.It is well known all over the world for pakistan to harbour terrorists and then deny, as in OBL episode.In the fullness of time, nisar will regret his words, but for the time being lets put it down to him having a bad hair day (no pun intended).When monkeys are put in position of power, they abuse it.