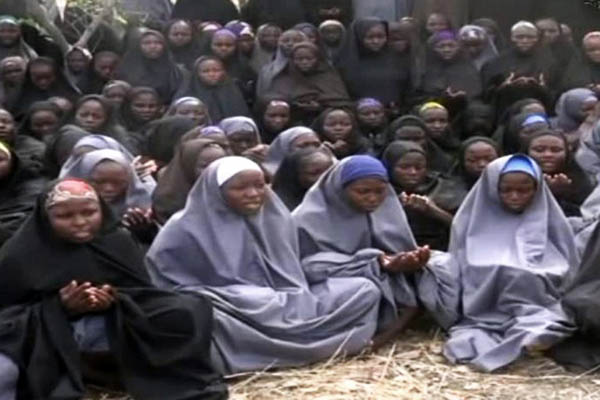 A screengrab of the missing girls from a video sent by Boko Haram militants. AFP

Amina Ali is the first of 219 schoolgirls to return home, over two years after militants kidnapped the group.

The first of 219 schoolgirls abducted by Boko Haram from Chibok in northeast Nigeria more than two years ago has been found, according to activists, the head of a support group and a community leader.

Amina Ali was discovered on Tuesday in the Sambisa Forest area of Borno state by civilian vigilantes assisting the military and brought back to her hometown of Mbalala, near Chibok. “She met her parents, who recognized their daughter before she was taken to the military base in Damboa,” said Ayuba Alamson Chibok, a community leader in Chibok. “Her father’s name is Ali and the girl’s name is Amina. I know the family very well because I have worked with them, being a spokesman for the families of the Chibok girls.”

Yakubu Nkeki, head of the Abducted Chibok Girls Parents’ group, also confirmed her name and said she was 17 when she was abducted. He added: “She’s the daughter of my neighbor… They brought her to my house.”

Tsambido Hosea Abana, a Chibok community leader in the capital, Abuja, from the BringBackOurGirls pressure group, was the first to give details about the discovery. All three men said the teenager appeared to have given birth while in captivity while Abana said other kidnapped girls were in the forest, which the military has been targeting for several weeks.

There was no immediate word from the Nigerian authorities.

Boko Haram seized 276 students from the Government Girls Secondary School in Chibok on the night of April 14, 2014. Fifty-seven managed to escape in the immediate aftermath. Nothing had been heard from the 219 still held captive since a video published by the Islamists in May 2014 until an apparent “proof of life” message was sent to the Nigerian government earlier this year.

The abduction sparked outrage worldwide and brought global attention to the Boko Haram insurgency, which has killed at least 20,000 people and made more than 2.6 million homeless since 2009.