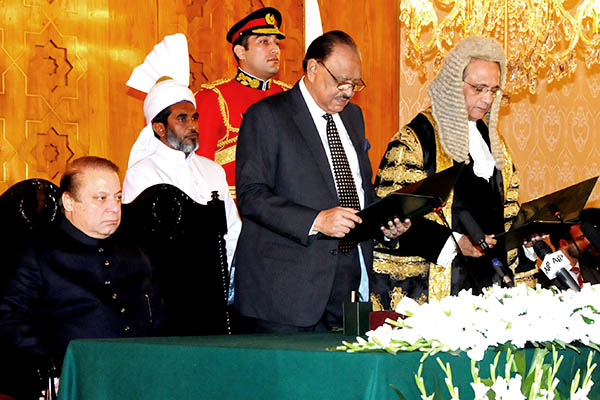 New head of judiciary seen as a quieter presence who is less controversial than his predecessor.

President Mamnoon Hussain swore in Justice Tassaduq Hussain Jillani after Iftikhar Muhammad Chaudhry stepped down a day earlier amidst controversy after he allegedly banned all but one private media outlet from reporting on his farewell. Prime Minister Nawaz Sharif, Chaudhry and other top government officials including ministers attended the oath-taking ceremony of Jillani.

Chaudhry, originally appointed in 2005 during the military rule of Pervez Musharraf, is criticized for exceeding the proper authority of the chief justice and interfering in political matters. In June last year he chaired a Supreme Court bench that sacked the then-prime minister Yousaf Raza Gilani after convicting him of contempt of court. The move, likened by some observers to a “judicial coup,” marked the culmination of a long-running tussle between the judiciary and the government led by the Pakistan Peoples Party over corruption allegations against the then-president Asif Ali Zardari.

Legal circles see the 64-year-old Jillani to be a far quieter presence. Jillani has been a Supreme Court judge since 2004 and, like Chaudhry, was sacked when Musharraf imposed emergency rule in November 2007.