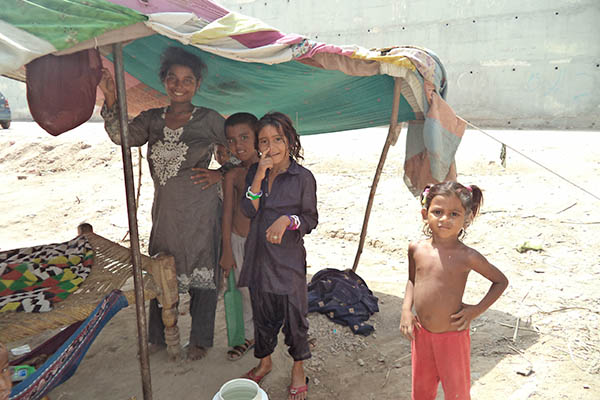 Teenager Sakina Bibi, far right, poses with other children at a settlement in Peshawar. Photograph by Mahwish Qayyum

Pakistan has one of the highest maternal mortality ratios in South Asia, with nearly one in five women likely to develop complications during pregnancy and childbirth. The dangers, already pronounced due to improper nutrition and lack of trained personnel, are magnified with teen pregnancies, a particularly problematic issue for Khyber-Pakhtunkhwa province, where almost 15% of girls give birth to their first child before the age of 18.

Despite being a signatory to several global pledges to rein in child marriage, the practice remains widespread across Pakistan, largely due to poverty, traditional mindsets and social and gender inequality. Early marriage, say medical practitioners, often results in frequent and unplanned pregnancies that pose a significant threat to both the minor girls and their infants. The statistics are harrowing: UNICEF estimates that 21% of Pakistani girls are married before their 18th birthday, while 3% are married before they turn 15.

Samreen Irshad was married off at the age of 15 and gave birth to her first child while she was still a legal minor. Like 70% of all births in Pakistan, her daughter was born at home with the help of a midwife. “I kept screaming throughout labor because of the pain and was repeatedly told to stop crying by the midwife,” she tells Newsweek. “The birth lasted 12 hours and left me traumatized,” she continues, adding she told her husband she was not sure she could tolerate the pain of another childbirth. “But my husband wanted more babies and I had no choice except to become a child-bearing machine for him,” she notes ruefully, adding it was ironic that men, and not women, had the final say on family planning in Pakistan.

A year after her daughter was born, Irshad became pregnant once again, a normally joyous occasion leaving her filled with dread as she recalled the terror of her first birth. A difficult labor followed, this time ending in tragedy as her son died during childbirth. This sad fate is all too common for young mothers, according to UNICEF, which notes that infant and stillborn deaths tend to occur 50% more among mothers under 20 than in women who get pregnant later in life.

Another victim of child marriage is Sakina Bibi. Her parents married her off when she was barely 13 to reduce the “number of mouths they had to feed.” She says she was so naïve at the time of her marriage that she thought it was just an excuse to dress up and wear jewelry; she didn’t even know what sexual intercourse entailed. Her ignorance, however, did not stop her mother-in-law from demanding she “prove” her fertility.

“I became pregnant around a month after my marriage,” she tells Newsweek. “It was a difficult pregnancy; I had severe nausea and would vomit out whatever I consumed,” she says, adding that she fainted several times due to weakness and lack of rest.

Dr. Sultana Barlas, a gynecologist and Medical Superintendent at Peshawar’s Government Maternity Hospital, says pregnancies among minor girls can have a devastating impact on their health, leaving them vulnerable to premature births and other complications. Teenage girls’ bodies are biologically incapable of managing pregnancies, she adds. Either ignorant or ambivalent to these risks, Bibi’s mother-in-law told her to stop acting out, as “you’re not the first woman to bear a child.”

Finally, Bibi gave birth to a baby boy. At 14, the child had herself become a mother. “I had a complicated childbirth and my son remains malnourished,” she says. “I’m now pregnant again.”

Bibi’s experience is still relatively mild, according to Dr. Barlas. She says adolescent pregnancies often carry several life-threatening issues, including obstetric labor, infant and maternal mortality, preterm birth, low birth weight, iron, calcium and other deficiencies in mother and child. According to the U.N., complications during pregnancy and childbirth are the second leading cause of deaths for 15-19-year-old girls globally, with 95 percent of these deaths occurring in low- and middle-income countries like Pakistan.

Qamar Naseem, the program coordinator for non-profit Blue Veins, says poverty remains the greatest reason in Pakistan for most parents seeking to marry off children at a young age. Stopping the practice is all the more difficult because of outdated child marriage laws that do not go far enough to punish violators.

Following the passage of the 18th Amendment in 2010, healthcare has been devolved to provincial governments. In the years since, both Sindh and Punjab have passed laws prohibiting child marriage—though Punjab allows girls to be married at 16, while Sindh has a minimum age of 18. Both provinces have also significantly increased the punishment for anyone involved in child marriage. Khyber-Pakhtunkhwa, meanwhile, has yet to pass any legislation for itself and continues to utilize the Child Marriage Restraint Act 1929, which punishes violators with just a month of imprisonment and a Rs. 1000 fine.

Pakistan, as a member of the South Asian Initiative to End Violence Against Children, had committed to ending child marriage by 2018. However, says Naseem, practically no serious effort has been made to curb child marriage in Khyber-Pakhtunkhwa or Balochistan. He says that in March 2014, the Council of Islamic Ideology even went so far as to rule that laws related to minimum age of marriage were against Islamic teachings and that children of any age could marry if they had attained puberty.

Fortunately, this has not stopped lawmakers from working to enact legislation that can curb child marriage. The Khyber-Pakhtunkhwa Child Marriage Restraint Bill has been forwarded to the provincial law department and could soon be presented before the cabinet for final approval. Parliament has also passed amendments to the federal Child Marriage Restraint Act 1929, despite conservative opposition, which are currently facing final approval from relevant committees. This could be a game-changer and ensure girls’ fundamental rights are protected. John F. Kennedy once said that children are the world’s most valuable resource; it is high time Pakistan ensures that any child, regardless of gender or socioeconomic concerns, gets a chance to fulfill that promise.