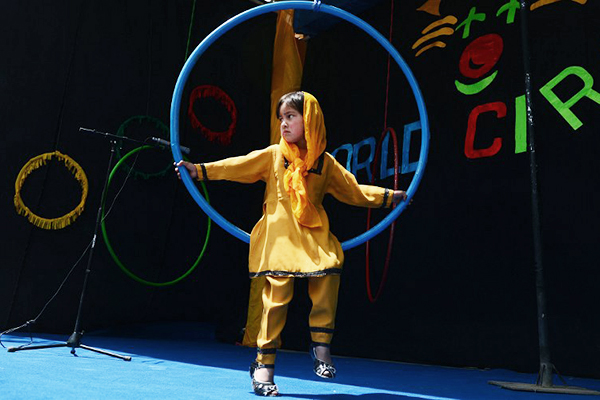 In a dusty city of gray concrete blast walls where there’s not always much to smile about, the organizers of a children’s circus try to provide a splash of color and joy.

During Taliban rule in Afghanistan, music and dance were banned, and fewer than one million children—and no girls—attended school nationwide. After their fall, while other NGOs and government agencies focused on food, shelter, and education, the Kabul-based Afghan Mobile Mini-Circus for Children, founded in 2002, strove to introduce “soft” values, bringing children together to foster a more joyful atmosphere despite frequent hardship.

“It’s a special circus,” said founder David Mason, a former salsa and tango instructor from Denmark. “It’s a circus to educate, give meaning to life, make children happy, make them dream and to realize their dreams, and gain self-confidence and inspiration.”

Professional adult artists tour and perform for children across the war-torn country. In the past 11 years, Mason said the circus and its local partner, the Afghan Educational Children’s Circus, have attracted a total live audience of more than 2.7 million people in 25 provinces.

At a show in Kabul on Sunday to mark World Circus Day, young performers in colorful cloaks circled a courtyard on roller skates and girls wearing headscarves showed off their juggling skills. Children performed cartwheels, backward somersaults, and formed human pyramids, dancing and clapping to entertain an audience of their peers from a camp for internally-displaced people and an orphanage.

Conditions in the camps housing the country’s half million internal refugees are notoriously harsh. In the winter of 2011-2012, about 100 people, mostly children and the elderly, lost their lives in the cold. “When you are living under a plastic sheet in a Kabul winter, then… hardship and surviving makes people forget about living. And then once you have survived, there’s nothing much to live for,” said Mason, 47.

The circus works to change that. A total of 120 girls and boys attend a center in Kabul after regular school hours to learn circus skills, going on to give performances in schools and refugee camps. “They are semiprofessionals,” said Mason, co-director of the nonprofit body with his partner, Berit Muhlhausen. The Mobile Mini-Circus also draws on support from some 100 international professionals and volunteers.

Enjoyment is the main message, but the circus also stages hour-long educational performances starting with a Quran recital. They include messages lasting for 10 to 15 minutes on the importance of hygiene, school attendance, mine awareness, and malaria prevention. Children “never forget the messages because the music is there, the story is there, compared with traditional messages,” said Mason. But the overriding message is to be happy. “It’s difficult to convince academics and people in power that having a reason to be joyful is a huge achievement, an aim in itself.”

Mason added that he has “very good relations” with the education and culture ministries. Deputy Culture Minister Nabi Farahi watched Sunday’s show. He said attention to children’s art and talents “is really important in society. We can see that young Afghan people have a lot of talent.” Firouz, an 11-year-old who lives in a camp for internal refugees, also enjoyed the show. “This program is fun,” he said. “I’d like to learn how to juggle and do gymnastics. It’s really good.”

Every year the circus brings together children from across Afghanistan for major events such as festivals and children’s assemblies. This, says the Mobile Mini-Circus, promotes unity in a multiethnic country. The circus, which has also performed overseas, says 75 percent of all its activities are run and taught by children at a time when Afghanistan is taking control of its own future as the international community steps back.

“Over the past decade, the children and youngsters at [the circus] have developed the capacity to lead young people across Afghanistan,” it says on its website. “Their voices are the voices of Afghanistan’s future.”