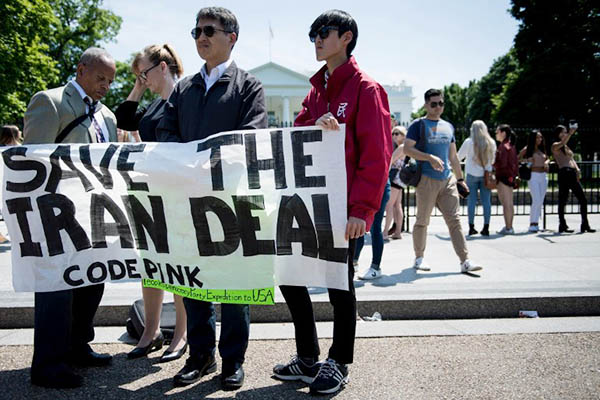 China on Monday said “unilateral bullying” by the United States was the cause behind the escalating Iran nuclear crisis, after Tehran announced it was set to breach its uranium enrichment cap.

“The facts show that unilateral bullying has already become a worsening tumor,” said Chinese foreign ministry spokesman Geng Shuang at a press briefing in Beijing. “The maximum pressure exerted by the U.S. on Iran is the root cause of the Iranian nuclear crisis,” he said.

Iran threatened on Sunday to abandon more commitments to an endangered 2015 nuclear deal unless a solution is found with the remaining parties after the U.S. pulled out. The 2015 deal was reached between Iran and six world powers—Britain, China, France, Germany, the United States and Russia—and saw Tehran agree to drastically scale down its nuclear program in exchange for sanctions relief.

Washington began re-imposing sanctions on Iran in August 2018 and has targeted crucial sectors including oil exports and the banking system, fueling a deep recession. Tehran’s move to start enriching uranium above the maximum purification level has already drawn opposition from countries backing the nuclear deal, with Germany urging it to “stop and reverse all activities inconsistent with its commitments.”

Geng said China has expressed “regret” for Tehran’s decision to reduce its fulfillment of the Iran nuclear deal.