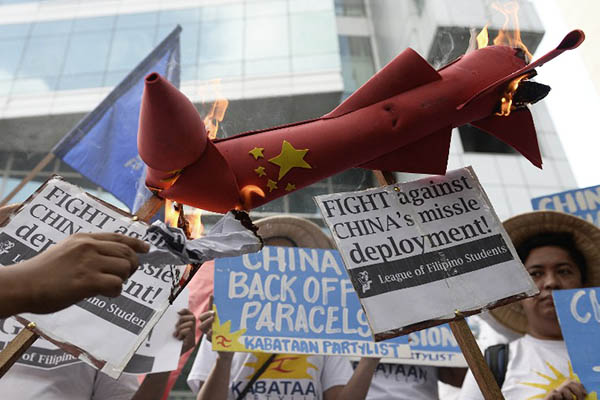 Regional states warn of potential consequences as a result of the reported Chinese measures.

China confirmed it has weapons on a disputed island in the South China Sea, state media said Thursday, as criticism grew over Beijing’s increased “militarization” of the strategically vital region.

The U.S. and Taiwan both said China had placed missiles on Woody Island, part of the Paracels chain, after Fox News reported the surface-to-air weapons had arrived there in the past week. Beijing confirmed the presence of “weapons” on the island, reported the Global Times newspaper, which has close ties with the ruling Communist party, but stopped short of acknowledging there had been a new missile deployment, saying defense measures there were “nothing new.”

Vice Admiral Alexander Lopez, the commander of Philippine military forces assigned to guard the country’s interests in the South China Sea, outlined the potential regional consequences of the reported Chinese action. “The stability of the region is being threatened because of the deployment of those kinds of weapons,” he said Thursday. “You don’t deploy those types of weapons unless you intend to use them,” he added.

China claims all of the Paracels, though Hanoi and Taipei have overlapping claims. Beijing seized several islands there from South Vietnam in a brief, bloody battle in the 1970s.

But tensions in the sea—through which a third of the world’s oil passes—have mounted in recent months after China transformed contested reefs in the Spratly islands further south into artificial islands capable of supporting military facilities.

“There is every evidence, every day, that there has been an increase of militarization of one kind or another. It’s of a serious concern,” U.S. Secretary of State John Kerry told reporters on Wednesday. A U.S. official told AFP that China has deployed surface-to-air missiles on the island. The official said they appeared to be HQ-9s, which have a range of about 200 kilometers. Experts say they could be used to target enemy aircraft.

The Fox News report was based on pictures from ImageSat International, which earlier this week released images said to show reclamation work in the Paracels.

Washington says China’s actions in the South China Sea threaten free passage in a strategically vital area and has sent warships to sail close to the disputed islands to assert freedom of navigation, raising fears of escalation.

“We have said repeatedly with respect to China that the standard that should be applied to all countries with respect to the South China Sea is no militarization,” Kerry said.

During a state visit to Washington last year, Chinese President Xi Jinping vowed not to militarize the disputed Spratly island chain. “We had these conversations with the Chinese and I’m confident that over the next days, we will have further very serious conversations on this,” Kerry added.

The top U.S. diplomat expressed hope that Beijing would work to resolve the maritime disputes “not through unilateral action, not through force, not through militarization but through diplomacy and by working with other countries and claimants.”

On Tuesday, U.S. President Barack Obama called for “tangible steps” to lower tensions in the South China Sea. He made the remarks during a meeting in California with 10 leaders of the Association of Southeast Asian Nations, including Vietnam. The meeting ended with a joint statement calling for the “peaceful resolution” of the myriad competing claims over islands, atolls and reefs in the region.

Beijing claims nearly all of the South China Sea and insists its island building aims to provide public goods, such as search and rescue facilities, but maintains it has the right to deploy necessary “self-defense” measures there. “China has been deploying national defense facilities on Xisha island for decades, it is nothing new,” Chinese foreign ministry spokesman Hong Lei said Thursday, using the Chinese name for the Paracels. “It’s within China’s sovereignty. It is legitimate, reasonable and justified,” he said, adding “this kind of deployment has nothing to do with militarization.”

China’s Ministry of Defense confirmed that “China has deployed weapons on the island for a long time,” reported the Global Times. It did not specify which weapons were on the island.

A Thursday editorial in the newspaper argued that the U.S. has “injected the most military elements in the region.” If China has in fact placed surface to air missiles on the island, they might make “jet fighters from the U.S. … feel uneasy when making provocative flights in the region. To us, that’s a proper result,” the paper said.