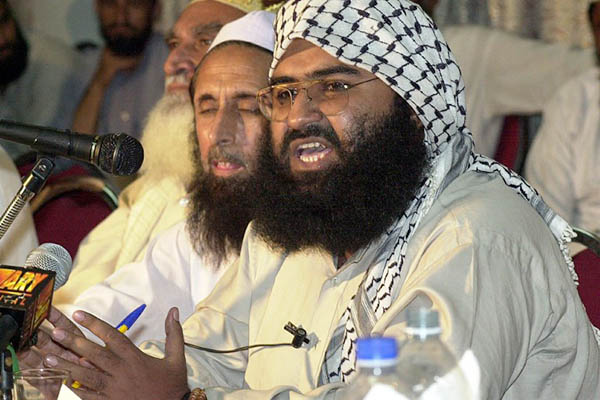 China on Wednesday put on hold a request by Britain, France and the United States to add the leader of a Pakistan-based Islamist group, which claimed a suicide attack in India-Occupied Kashmir, to the U.N. terror blacklist, diplomats said.

It was the fourth time that the U.N. Security Council was considering a request to put Masood Azhar, leader of Jaish-e-Mohammad (JeM), on the U.N. sanctions blacklist, which would subject him to a global travel ban, an assets freeze and an arms embargo.

Jaish-e-Mohammad has claimed responsibility for the Feb. 14 attack in Kashmir—perpetrated by a local separatist—that killed 40 Indian troops and which was condemned by the Security Council.

In a note, China said it needed more time to examine the sanctions request targeting Azhar and asked for a technical hold, which could last up to nine months, diplomats said. “It appears as though the Chinese have been protecting Pakistan’s priorities on counter-terrorism in the committee and so they are Pakistan’s protector,” said a Security Council diplomat, who asked not to be named.

China has blocked three previous attempts at the committee on sanctions against Al Qaeda and I.S.-linked groups to blacklist the JeM leader. The group itself was added to the terror list in 2001.

The United States, France and Britain are “actively considering” a new attempt, this time with a draft Security Council resolution that would designate Azhar as a terrorist, the diplomat added. “The case is compelling to list Azhar,” said the diplomat. “Certain countries are not going to stand for this. This is the fourth time now.”

China defended its decision by saying it was upholding a “responsible attitude” and seeking to deal “with this issue with relevant parties via thorough consultation,” said the Chinese mission to the United Nations. “China believes that only a plan adopted by all can offer a long-term solution,” said the mission, quoting foreign ministry spokesman Lu Kang.

Tensions between India and Pakistan have soared since last month’s attack in Kashmir that prompted tit-for-tat air raids, stoking fears of an all-out conflict between the two nuclear-armed countries.

India on Feb. 26 staged an air raid on a camp inside Pakistan that it said belonged to JeM. One day later, Pakistan responded with fighter jets crossing into India-Occupied Kashmir. A pilot who was shot down over Pakistani territory was later sent back to India.

Islamabad announced last week that more than 100 militants, including many from JeM, had been detained, but India has greeted those statements with suspicion. Pakistan’s Foreign Minister Shah Mehmood Qureshi also recently denied in a television interview that JeM had claimed responsibility for the suicide attack.

Kashmir has been split between India and Pakistan since their independence and angry division in 1947. India has long accused its neighbor of supporting Kashmir rebels. Pakistan denies any role in attacks in the Indian side of the Himalayan region, where tens of thousands have died in an armed insurgency since 1989.