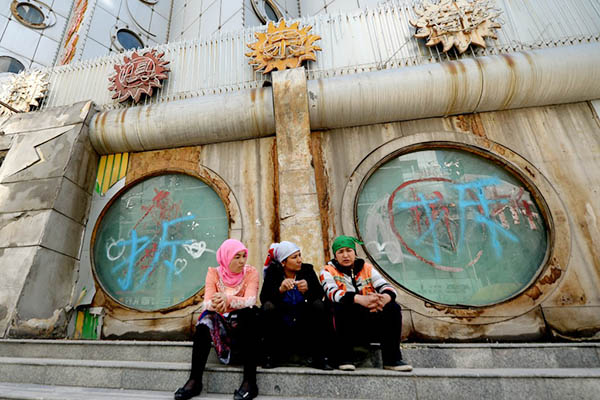 Their Uighur wives vanished in 2017, swept up in a Chinese dragnet tackling Islamic extremism. Now they’ve been released—but the Pakistani husbands left behind say freedom has come at a price: The women must prove their “adaptability to Chinese society,” and publicly sacrifice their religious ideals.

The group of around 40 women—all from the western Chinese province of Xinjiang and married to traders from neighboring Pakistan—were among some one million people believed to be held in a network of internment camps that authorities downplay as “vocational education centers.” But the men say their partners were forced into acts that are haram, or forbidden, to followers of Islam—both in the camps and now they’ve been freed.

“She said they had to eat pork and drink alcohol, something she still has to do,” one merchant, who recently visited his wife at her parents’ house in Xinjiang told AFP, on condition of anonymity. “She was told that she had to satisfy the authorities that she no longer possesses radical thoughts if she does not want to go back,” he explained, adding that she had given up praying and the Quran had been replaced by books on China at his in-laws’ home.

Some of the traders, who traditionally leave their wives in Xinjiang for weeks or months at a time when they return home to conduct business, believe the women were taken to the camps because of their connection to Pakistan, which is an Islamic republic. Former detainees have said they were held simply for following Islamic traditions, such as having a long beard or wearing a veil.

But with the detention centers, part of a security clampdown targeting Muslims including ethnic Uighurs, facing growing international condemnation and China pushing its economic relationship with Pakistan, authorities began slowly releasing the women two months ago.

Faiz Ullah Faraq, a spokesman for the government of Gilgit-Baltistan, the Pakistani region that borders Xinjiang, confirmed the “majority” have now been released.

AFP interviewed nine of the women’s husbands, who confirm their wives are free but cannot leave Xinjiang for three months, during which time they will be closely monitored. “They will observe her adaptability to Chinese society and if they deem her to be unfit she will be sent back,” a gemstone trader said of the rules of release.

Their initial joy at the release of much-loved wives and mothers has faded because the women who’ve returned are like strangers. “My wife said she was forced to dance, wear revealing clothes, eat pork and drink alcohol in the camp,” he revealed, adding that she now carries with her a book of guidelines, which features illustrations such as a mosque marked with a red cross, and a Chinese flag with a green tick. “She used to pray regularly but now it’s gone, and she has started occasionally drinking [alcohol] which she does in the restaurants,” he explained, adding that he believed officials required such acts from the women.

He too declined to give his name for fear of repercussions from authorities, who make surprise visits to his wife’s home in Xinjiang every week.

James Leibold, an expert on Chinese security at Australia’s La Trobe University, told AFP that stepped-up surveillance policies in Xinjiang gave authorities “increased confidence” in their ability to closely monitor those released from the camps.

Since their release, the families of many of the women say they have become paranoid and fear of being reported on. “The worst thing was her silence,” the merchant explained, adding: “She suspects everyone, her parents, her family, even me.”

The seven other traders interviewed by AFP, anonymously, have been in contact with their wives only by telephone and gave similar testimonies.

Maya Wang, Human Rights Watch’s senior researcher on China, said the activist group has heard stories of people being released from the camps and subjected to house arrests or severe restrictions on movement. “These releases may indicate that the Chinese government is increasingly sensitive to heightening international pressure over its serious abuses in Xinjiang,” she said.

Last month U.S. Secretary of State Mike Pompeo renewed demands China end its widespread detention of Uighur Muslims as he met with Mihrigul Tursun, who claims to be a former detainee, and has spoken publicly about what she said was widespread torture in the camps. Beijing “cannot afford international criticism of its policies in Xinjiang to spread throughout the Muslim world, especially in Pakistan,” China security expert Leibold explained.

In recent years, China has strongly pushed its relationship with Pakistan, investing heavily in infrastructure projects under the China-Pakistan Economic Corridor. For its part, Pakistan has been reluctant to publicly join global condemnation of Beijing’s crackdown on Muslims in Xinjiang. When pressed on the subject in a recent interview with the Financial Times, Prime Minister Imran Khan said: “Frankly, I don’t know much about that.”

But for the merchant and the other traders, it is as though their wives are still lost. He explained: “My wife, a practicing Muslim, has been turned into someone I could not even imagine. She has given up her prayers, drinks and eats pork.” He added: “I am afraid our marriage will not last long because she is a completely different person, someone whom I don’t know.”

Imran Khan’s one-liner “Frankly, I don’t know much about that” says it all.