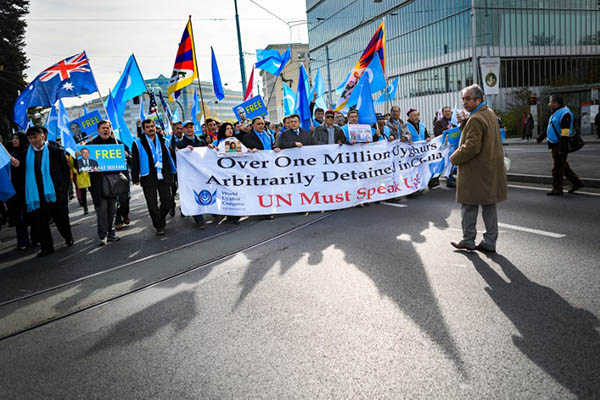 China faced harsh criticism over its rights record during a review before the United Nations on Tuesday, with countries voicing alarm at the country’s mass detainment of ethnic Uighurs and its crackdown on civil liberties.

During the half-day public debate at the U.N. Human Rights Council in Geneva, a number of countries raised concerns about China’s treatment of ethnic minorities, including Uighur Muslims and Tibetans.

As the debate got underway, around 500 people demonstrated outside the U.N. waving banners with messages like “China, stop genocide of Uighurs” and “Tibet dying, China lies.”

The so-called Universal Periodic Review—which all 193 U.N. countries must undergo approximately every four years—came amid increasing scrutiny over what rights activists describe as mass political re-education camps in China’s fractious far western Xinjiang region. As many as one million Uighurs and other Muslim minorities are being kept in extra-judicial detention in the region, according to an estimate recently cited by an independent U.N. panel, and repeated during Tuesday’s debate.

Activists say members of China’s Muslim minorities are held involuntarily for transgressions such as wearing long beards and face veils.

“We are alarmed by the government of China’s worsening crackdown on Uighurs, Kazakhs, and other Muslims in the Xinjiang Uighur Autonomous Region,” U.S. representative Mark Cassayre told the council. Washington, he said, would like to see China “abolish all forms of arbitrary detention, including internment camps in Xinjiang, and immediately release the hundreds of thousands, possibly millions, of individuals detained in these camps.”

A long line of countries echoed those concerns.

French Ambassador Francois Rivasseau asked that China “put an end to its massive internment in camps, and to invite the U.N. High Commissioner for Human Rights” to observe the situation.

Members of the large Chinese delegation that took part in the debate however rejected a number of the issues raised, with China’s vice foreign minister Le Yucheng, who served as delegation chief, slamming “politically driven accusations from a few countries which are fraught with biases.” The Chinese delegation members reiterated Beijing’s line that the tough security measures in Xinjiang were necessary to combat extremism and terrorism, and that they did not target any specific ethnic group.

They said vocational “training centers” had been set up in the region to help people who appeared to be drawn to extremism to stay away from terrorism and allow them to be reintegrated into society.

China also came under scrutiny for other aspects of its human rights record, including its use of the death penalty and a dramatic crackdown on civil liberties and religious freedoms since President Xi Jinping took power in 2012.

In July 2017, dissident activist and Nobel Peace Prize winner Liu Xiaobo died of liver cancer while under police custody. In 2015, more than 200 Chinese human rights lawyers and activists were detained or questioned in a sweep known as the “709” crackdown.

China’s crackdown on civil society is sometimes felt as far away as Geneva.

Human Rights Watch has accused Beijing of sabotaging U.N. efforts to promote rights, maintaining that Chinese officials routinely photograph and film activists on U.N. premises, in violation of U.N. rules, and bar Chinese activists from travelling to the U.N. in Geneva.

The organization charged on Tuesday that information submitted ahead of Tuesday’s review of China by NGOs had been removed from the public record ahead of the debate. The U.N. suggested there had been a clerical error, which had since been rectified.

Beijing’s delegation flatly denied that there was a crackdown on civil rights in China, instead emphasizing the work the country had done to reduce poverty. “What China has achieved shows that there is more than just one path towards modernization and every country may choose its own path of development and model of human rights protection,” said Le Yucheng.

HRW’s Geneva director John Fisher said that the U.N. review of China “showed the chasm between Beijing’s view of its own human rights record and the grim realities for human rights defenders, arbitrarily detained Tibetans and Uighurs, and even those who simply wanted to participate in this review.”