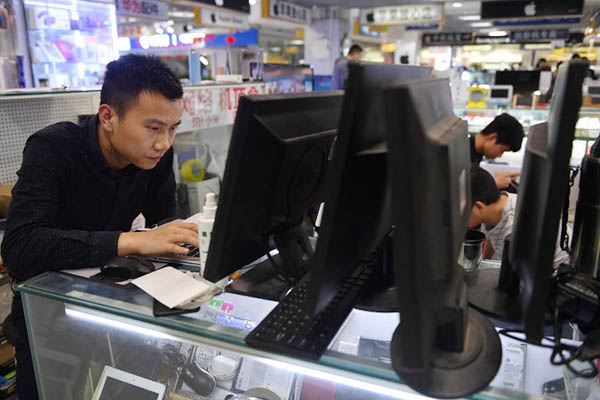 A man in China repairs a laptop. Greg Baker—AFP

The United States on Friday rebuked NAFTA-partner Canada, saying the country was not doing enough to clamp down on counterfeit goods, giving it the same ranking as China and India on a list of intellectual property offenders.

In an annual report on intellectual property rights violations by trading partners, the U.S. Trade Representative’s office downgraded Canada to the “priority watch list,” which subjects it to a more intense level of scrutiny.

China has been on the priority watch list for 14 years and India makes a repeat appearance, as the USTR said neither country had done enough to protect patented and trademarked products.

“The ideas and creativity of American entrepreneurs fuel economic growth and employ millions of hardworking Americans,” USTR Robert Lighthizer said in a statement. “This report sends a clear signal to our trading partners that the protection of Americans’ intellectual property rights is a top priority of the Trump administration.”

The report does not trigger any immediate sanctions and comes after Washington hit China with steep import tariffs on $50 billion in goods for its alleged serial theft of American technology. The U.S. also filed a complaint against that country at the World Trade Organization.

There are 12 countries on the priority watch list and another 24 on the less intense “watch list.” Colombia also was downgraded this year, joining Argentina and Chile, while Mexico, also a partner in the North American Free Trade Agreement, is on the list of lesser offenders.

The USTR accused Canada of “failure to resolve key longstanding deficiencies in protection and enforcement,” including failing to police counterfeit or pirated goods traveling across the border and failing to prosecute violators.

A USTR official told reporters the U.S. had “very serious concerns” with Canada’s intellectual property regime and “we want to see meaningful change.”

The notice comes as Lighthizer is holding meetings with his NAFTA counterparts, Canada’s Chrystia Freeland and Mexico’s Ildefonso Guajardo, on revising the 24-year old free trade pact. But the official declined to speculate on whether Canada’s downgrade would be discussed in the meetings.

“Part of the reason for Canada’s elevation is very longstanding frustration with enforcement and protection issues,” the official told reporters.

China also has longstanding problems with protection and enforcement of intellectual property rights and “continues to take steps backwards,” the official said, including forced transfer of technology from American companies trying to do business there.

“The unfair in pursuit of industrial policy goals place great strain on our bilateral relationship,” the official said.

The USTR said IP-intensive industries directly and indirectly supported 45.5 million American jobs, about 30 percent of GDP and more than half of U.S. exports.