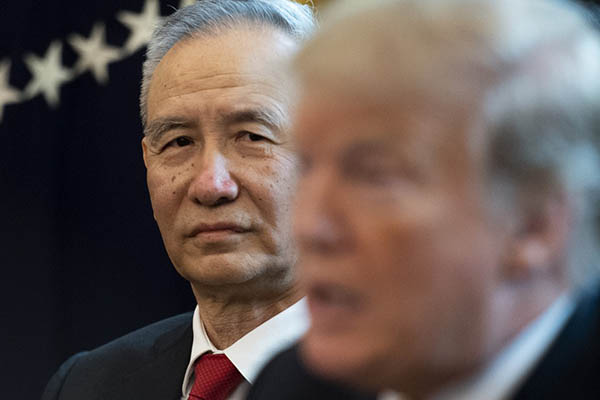 Vice Premier Liu He says punitive tariffs must be cancelled, text of agreement must be ‘balanced’

China’s top trade negotiator said more talks will be held with the United States as he revealed what Beijing considers the three main differences keeping the two sides from reaching a deal.

Speaking to reporters in Washington on Friday, Vice Premier Liu He for the first time gave details on where the negotiations stood following two days of talks with U.S. counterparts, with tariffs and how much China should import from America among the disagreements. “Negotiations have not broken down, but rather on the contrary, this is only a normal twist in the negotiations between the two countries, it is inevitable,” Liu said.

“Both sides agree they will meet again in Beijing in the future and keep pushing forward the negotiations,” he said without giving a date.

Since last year the United States and China have exchanged tariffs on more than $360 billion in two-way trade, gutting U.S. agricultural exports to China and weighing on both countries’ manufacturing sectors. Liu said the two days of talks in the U.S. were “productive.”

“We have a consensus in lots of areas but to speak frankly there are areas we have differences on, and we believe these concern big principles,” he said.

First, the Chinese side believes all punitive tariffs must be cancelled if an agreement is reached, he said, indicating that it remained under discussion. Second, Chinese President Xi Jinping and U.S. President Donald Trump agreed to a preliminary figure for purchases of U.S. goods when they declared a trade truce in Argentina last year, he said. “In the end, what is the figure? Now both sides have different views, we think this is a very serious thing that cannot be changed easily,” he said.

Third, the text of the agreement must be “balanced” between the two sides, he said, because “any country needs its own dignity.”

President Donald Trump, meanwhile, raised tariffs on $200 billion in Chinese goods and ordered officials to launch the process to impose custom duties on another $300 billion worth of imports—almost everything China ships to the U.S.

The negotiations took a downward turn after Trump accused China of reneging on its commitments. “We believe before we reach a deal, any changes are natural, and inevitable in the whole process,” Liu said. “We don’t believe China has backtracked,” he said, adding there were just differences on how to phrase the text of the agreement.

Asked about the tariffs that hit $200 billion worth of Chinese goods on Friday, Liu said: “if the U.S. slaps on tariffs, we must respond.” Noting China would exercise restraint, he added, “[we] don’t want unlimited escalation.”

Liu compared the negotiations to a marathon: “When you get to the last stage it is comparatively the hardest stage, now we need to hold on, it is the darkness before dawn.”

Liu, China’s top economic official, said the country’s economy was improving after bottoming out at the end of last year. “The most crucial issues are confidence and expectations,” he said, “as long as we in our hearts have confidence, we will not be afraid of any difficulties.”

“Although there will be some pressure, I believe China’s economy will continue to develop smoothly, healthily, in a good state,” he said.

China’s monetary and fiscal policy has “ample room” to maneuver, Liu said. “We need to rationally approach this, China is not afraid, and the Chinese nation is not afraid,” he said.