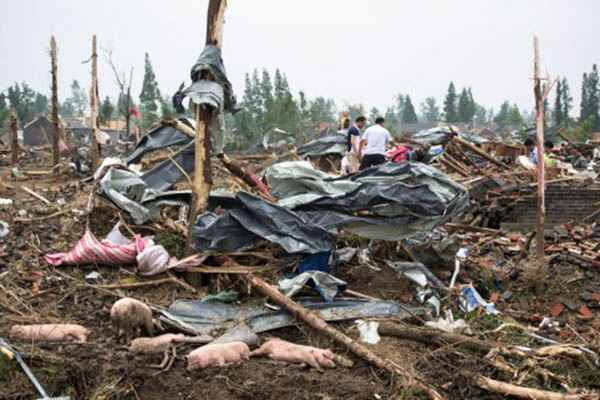 People scrabbled through the rubble of their homes on Friday after hurricane-force winds and a tornado left at least 98 dead in China, with hundreds more injured.

Whole villages were leveled and huge trees felled when winds of up to 125 kilometers per hour struck around Yancheng city in the eastern province of Jiangsu on Thursday, the official Xinhua news agency said.

In Shizhuang, scores gathered beside a large fishing pond where a male corpse floated in the water, as workers cleared up fallen electricity poles nearby. A distraught woman who thought he was her missing husband was held up by relatives, as another bystander asked: “How come no one is pulling him up yet?”

So far 98 people have been confirmed dead in the storm and 846 have been hospitalized with injuries, Yancheng’s deputy mayor Wu Xiaodan told a press briefing, according to the city’s verified microblog. President Xi Jinping ordered “all-out rescue efforts” after what Xinhua said was one of the worst disasters ever to hit Jiangsu, including the worst tornado to hit China in half a century.

In Funing County, one of the hardest-hit areas, residents shifted through the fallen bricks and pillars of their destroyed homes, many with their roofs torn off, and rubble spilled into a river. Wu, the official, said that 28,104 houses in the county had been affected.

Funing resident Sun Yazhou was driving a concrete mixer truck when a tornado passed him, tearing the glass out of his vehicle windows. “The sky was completely dark. I was scared, but I had nowhere to run. I had to wait it out,” he said.

Zhou Xiang, head of the provincial fire corps, said the search for survivors in the debris had been completed, according to Xinhua, and the clean up was now underway. More than 1,300 police officers had been mobilized to help, the agency added.

The wards of a hospital in Funing county were all full, with extra beds crowding the hallways. Sitting on a gurney in the hospital corridor, Chen Shaoxi nursed a head injury and broken leg that he sustained while saving his elderly neighbors from the storm.

“If it weren’t for my dad, those two would have been dead,” his son Wang Minming said.

A factory worker with head and arm injuries and on an intravenous drip told AFP he had been swept out of his workplace by the tornado, despite clinging to a door as he tried to hold it shut against the storm. “It all happened so fast. I have never seen anything like this before in my life,” he said. “I thought for sure I was going to die,” he added. “I can’t believe I am still alive.”

The Canadian Solar factory, which employed around 1,000 workers, and its dormitory were destroyed. “I have nothing now. My money, my things, all gone. It was so scary,” he said.

Workers and People’s Liberation Army soldiers were removing fallen high voltage electricity poles around the factory, where buildings had been stripped of their roofs by the storm and their windows blown out. Reports said more than 360 rescuers were deployed at the factory, where two employees of the firm, which is based in West Guelph, Ontario, were missing.

Flooding is common during the summer monsoon season in the south of China, but rainfall has been particularly heavy this year. Many parts of China have been lashed by torrential rains this week as summer rainstorms have been heavier than usual, causing damage across the country.

Ten people were killed in Beicheng village near the factory—the youngest only nine years old.

Villager Tang Yuxing told AFP that his neighbor, a cook in her forties, was walking home from work at the factory but got caught up in the tornado, which flung her up into the air and killed her on impact. Her husband works abroad in Singapore, and her son had just left home for college in the provincial capital of Nanjing. “It’s just her alone now, lying in the morgue all by herself,” he said. “All it took was a crazy wind, and a life was lost.”