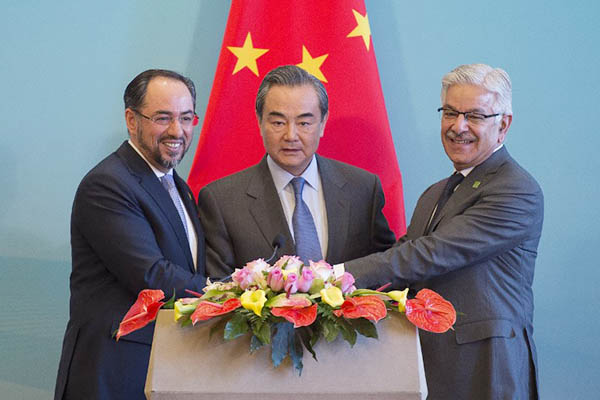 Ministers from Afghanistan, Pakistan and China met in Beijing on Tuesday where they agreed to work together to tackle the threat of terrorism tied to China’s vast western Xinjiang region.

The first trilateral meeting of foreign ministers from the countries comes as China steps up its investment in its neighboring nations as part of its trillion-dollar One Belt One Road investment initiative.

China depends on Afghanistan and Pakistan to help control Xinjiang’s borders, where analysts say Beijing’s repressive policies have engendered riots and terrorist attacks by members of the mostly Muslim Uighur ethnic minority that calls the area home, although China disputes the claim.

Beijing regularly accuses exiled Uighur separatist groups such as the shadowy East Turkestan Islamic Movement (ETIM) of orchestrating attacks in resource-rich Xinjiang and other parts of China. It has expressed concern about Uighur militants finding sanctuary in Afghanistan and Pakistan.

“We agreed to cooperate in fighting terrorism in all its forms and manifestations and without any distinctions of any sort,” said Afghan foreign minister Salahuddin Rabbani after the meeting.

Afghanistan will continue its “resolute fight against ETIM and their support groups and networks, and overall counterterrorism cooperation,” he added.

China has long pushed the international community for support in addressing the problem, which it says stems from the infiltration of “radical” religious groups into Xinjiang. In response, Beijing has placed strict controls on religious practice in the region, turning it into a virtual police state, in a campaign that analysts say has enflamed separatist sentiment.

Chinese foreign minister Wang Yi said the three parties had reached complete consensus in fighting terrorism, adding that China would also “fully leverage” Xinjiang as a base for economic cooperation with the bordering countries.

This summer two Chinese citizens traveling on business visas to Pakistan were kidnapped in Quetta. The Islamic State group claimed responsibility for killing them. Pakistan said at the time that the two had been engaged in illegal preaching.