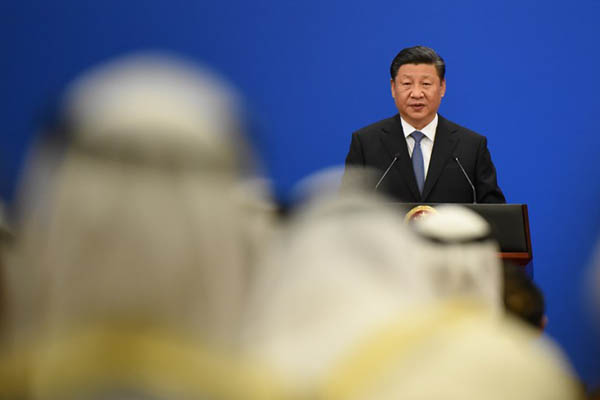 China will provide Arab states with $20 billion in loans for economic development, President Xi Jinping told top Arab officials on Tuesday, as Beijing seeks to build its influence in the Middle East and Africa.

The money will be earmarked for “projects that will produce good employment opportunities and positive social impact in Arab States that have reconstruction needs,” said Xi, without providing further details.

It is part of a special Chinese program for “economic reconstruction” and “industrial revitalization,” Xi told participants at a China-Arab States forum in Beijing’s Great Hall of the People.

Beijing is also prepared to provide another one billion yuan to countries in the region to “build capacity for stability maintenance,” Xi said, using a term commonly associated with policing and surveillance.

Since taking office, Xi has overseen a concerted effort to expand Chinese influence in the Middle East and Africa, including the construction of the country’s first military base in Arab League state Djibouti.

China has already provided vast sums to Arab countries, with Djibouti alone owing some $1.3 billion, according to estimates from the U.S.-based China Africa Research Initiative.

The financial largesse has raised concerns both at home and abroad over the vulnerability of poor nations to such massive debt.

Last year Sri Lanka was forced to hand over majority control of its Hambantota port to China after being unable to repay its loans.

At the heart of Xi’s vision is the “Belt and Road” initiative, a $1-trillion infrastructure program billed as a modern revival of the ancient Silk Road that once carried fabrics, spices and a wealth of other goods between Asia, Africa, the Middle East and Europe.

The Arab states’ position at the center of the ancient trade route makes them “natural partners” in China’s new undertaking, he said, adding he expected the summit would end with an agreement on cooperation on the initiative. “Chinese and Arab peoples, though far apart in distance, are as close as family,” he said, describing a romanticized history of trade along the Silk Road.

The project, which has already financed ports, roads and railways across the globe, has spurred both interest and anxiety in many countries, with some seeing it as an example of Chinese expansionism. “China welcomes opportunities to participate in the development of ports and the construction of railway networks in Arab states” as part of a “logistics network connecting Central Asia with East Africa and the Indian Ocean with the Mediterranean,” said Xi.