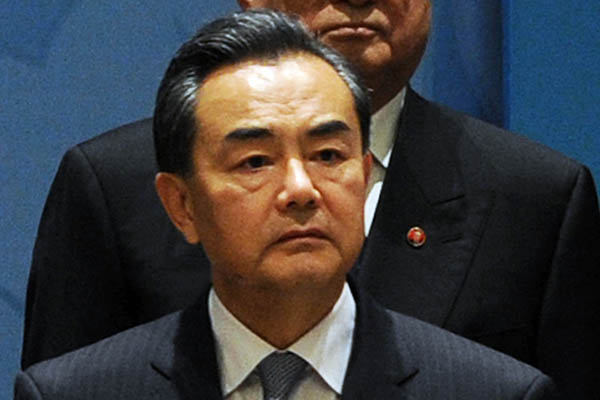 Beijing says countries outside the region should not extend ‘bossy gestures.’

China accused the U.S. of deliberately stoking tensions in the South China Sea as it rejected Washington’s proposal for a freeze on provocative actions in the region, the foreign ministry said Monday.

The remarks by Foreign Minister Wang Yi came on Sunday at an ASEAN Regional Forum overshadowed by disputes over the strategically significant sea. Beijing claims it almost in its entirety, putting it at odds with countries including the Philippines and Vietnam, and there have been several tense encounters in the area over recent months.

U.S. Secretary of State John Kerry appeared at the Forum to push for a multilateral agreement to end all actions that risk further inflaming regional sensitivities. But Wang said: “Some countries outside the region are restless, and stir up tensions … might their intention be to create chaos in the region?”

“Countries outside the region can express reasonable concerns, but we are opposed to ‘bossy gestures’,” Wang said, adding: “China and ASEAN are totally able to safeguard well the peace and stability of South China Sea.”

His comments, posted on the foreign ministry’s website Monday, were aimed squarely at the U.S., state-run media said. China’s official Xinhua news agency said that they amounted to a rejection of the U.S. suggestion, in an article headlined: China rebuffs U.S. ‘freeze’ proposal on South China Sea.

The state-run China Daily quoted Chinese official Wu Shicun as saying that Wang’s proposal “leaves no excuse for other countries to interfere in the South China Sea issue.”

The U.S. has stepped up its rhetoric on the South China Sea following a series of maritime incidents between China and rival claimants, including Beijing’s positioning of an oil rig in waters also claimed by Vietnam which sparked deadly riots in the Southeast Asian nation. Kerry on Saturday formally put forward Washington’s proposal to cool maritime tensions based on claimant states agreeing to step back from actions that could “complicate or escalate disputes.”

China’s claims in the sea, which lies on key shipping routes and is said to be rich in mineral and oil deposits, also conflict with the Brunei, Malaysia and Taiwan.