China Says It Will Not Back Down on South China Sea 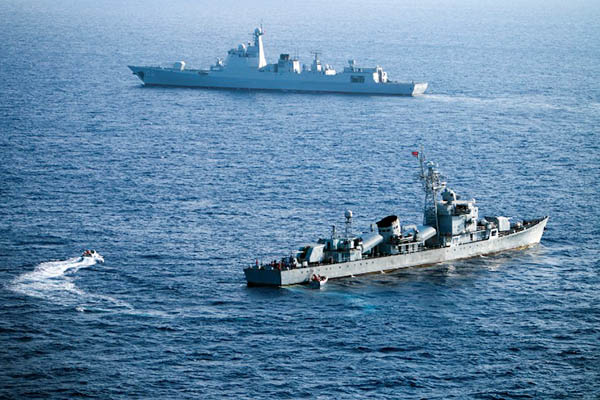 China warned Washington on Tuesday that it would not back down over its claims in the disputed South China Sea, following vows by the Trump administration to defend U.S. and international interests there.

China’s artificial islands in the sea, some with the potential for military use, are considered a potential flashpoint and tough comments from White House spokesman Sean Spicer and Trump’s nominee for secretary of state have raised the temperature.

“China has indisputable sovereignty over the South China Sea islands and their adjacent waters,” foreign ministry spokeswoman Hua Chunying told a regular press briefing, adding that the country is “firm in safeguarding our rights and interests.”

“The United States is not a party to the South China Sea issue.”

Spicer said on Monday that the U.S. “is going to make sure we protect our interests” in the sea. “If those islands are, in fact, in international waters and not part of China proper, yeah, we’ll make sure we defend international interests from being taken over by one country,” he said.

Trump’s nominee for secretary of state, Rex Tillerson, said last week China’s access to the islands might be blocked—raising the prospect of a military confrontation.

China lays claim to a vast swathe of the South China Sea within a so-called “nine dash line,” including waters claimed by several of its neighbors. Under president Barack Obama’s administration, Washington insisted it was neutral on the question of sovereignty over the islets, reefs and shoals. But, while calling for the dispute to be resolved under international law, the U.S. supported freedom of navigation by sending naval patrols through Chinese-claimed waters.

Hua said China “firmly upholds freedom of navigation and overflight in the South China Sea in accordance with international law” and urged the U.S. to “fully respect the efforts of regional countries to safeguard peace and stability.”

Despite the recent escalation in rhetoric, China is “not worried” about rising tensions with Washington, Hua said.

Beijing asserts sovereignty over almost all of the resource-rich region despite rival claims from Southeast Asian neighbors and has rapidly built reefs into artificial islands capable of hosting military planes. Though it lags behind the U.S. in raw military power, experts say China is counting on a strategy of deterrence to keep the world’s most powerful navy at bay.

“Beijing knows that it cannot win a conventional frontal conflict with the U.S.,” Valerie Niquet of French think tank Foundation of Strategic Research told AFP. “China is therefore seeking to develop capacities that would restore its freedom to maneuver by pushing Washington to hesitate before a potentially costly intervention in Asia.”

On Tuesday leading Chinese newspaper the Global Times called for the country to expand its nuclear arsenal to “force the U.S. to respect it.” Citing Trump’s calls for the U.S. to acquire more atomic weapons, the popular paper, known for its inflammatory rhetoric and hawkish views, said that Beijing’s nuclear forces “must be so strong that no country would dare launch a military showdown” with it.

In recent days, Chinese social media has carried pictures purporting to show an advanced intercontinental ballistic missile system deployed in the northeast. The Dongfeng-41 is reportedly a nuclear road-mobile missile thought to have a payload of 10-12 warheads and a range of 14,000 kilometers, according to the Global Times.

The newspaper said some media claimed the People’s Liberation Army leaked the photos as a warning to Trump. “They think this is Beijing’s response to Trump’s provocative remarks on China,” it added.

When one”s prosperity is built on Exporting 70% of one”s GDP ,one can only bark not bite.