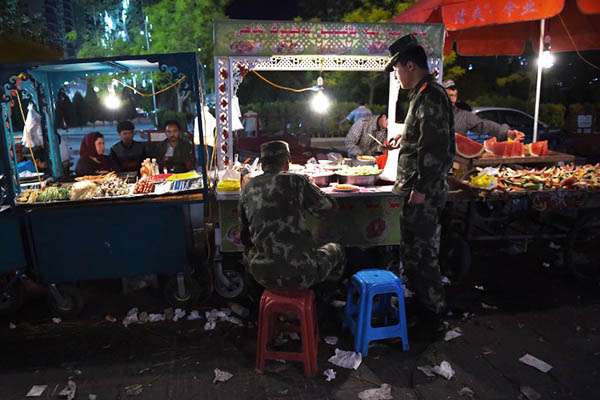 Newly employed as a hotel receptionist in Xinjiang, Fang Lihua is a foot soldier on the front line of a demographic contest for the mainly Muslim region’s identity as China opens it up for migration.

The resource-rich, far-western region is home to more than 10 million Uighurs, a Turkic minority with stronger cultural links to Central Asia than to the rest of China, dominated by the Han ethnic majority. It sees sporadic violence authorities blame on Islamist separatists, which has increased in intensity and spread beyond its borders in recent years.

Waves of mass migration from China’s heartland have raised Xinjiang’s Han population from six percent in 1949 to 38 percent in 2011. Now Beijing hopes to trigger a new influx with the most liberal residency rules in China.

Fang, who is Han and in her 20s, took a three-day train ride from China’s ancient capital Xian to reach her new home in Hotan. The oasis town by the Taklamakan desert is renowned for its jade and fruit, but held little charm for her. “I hate it here,” she said. “It’s completely foreign, I don’t think I’ll be able to adjust to life here.”

She and her builder husband are among the first to take advantage of new rules announced six months ago, and she says they may stay despite her misgivings.

In cities across China, migration is strictly controlled, with new arrivals struggling for years to secure the all-important household registration, hukou, entitling residents to education, healthcare, social insurance and more. Larger cities require advanced degrees, special skills or a job at a well-connected or government-owned company.

But in southern Xinjiang, the latest regulations mean a hukou is available with no educational or skill requirements at all.

Nationwide changes to the system are in the pipeline with urbanization a key driver of the Chinese economy, but the fact that the Uighur-dominated area has been chosen for the country’s most liberal rules is striking. More than 200 people died in Xinjiang-linked incidents last year according to official media reports, including a bloody mass stabbing in Kunming in southwestern China.

“The hukou reforms are about trying to encourage Han migration to southern Xinjiang, even though it’s not phrased in that way,” said James Leibold, an expert on ethnic relations in China at Australia’s La Trobe University. “The idea behind that is to encourage more inter-ethnic mingling and hopefully by bringing more Han, the quality and the civilization of southern Xinjiang will increase.”

At the same time the government is trying to stem population growth among minorities.

Propaganda throughout rural Hotan encourages residents to “have fewer children and get rich quick,” with a 3,000 yuan payout for those who forgo having the third child allowed to many ethnic minority couples under China’s family planning rules, compared to one or two for Han.

Security concerns and poor business opportunities would put off many potential migrants, Leibold said. But that did not stop construction worker Du Yun, from Sichuan, who arrived in November.

“I prefer the air in Sichuan, we don’t have sandstorms, but the social benefits are better in cities,” he said.

Areas of Xinjiang have at times been part of different states, including Russia, sometimes independent, but it has largely been ruled by Beijing since the late 1800s. After the Communists won China’s civil war in 1949, it saw waves of migration from the east.

The semi-military Xinjiang Production and Construction Corps settled demobilized soldiers on work farms and today runs businesses including real estate, insurance, plastics and cement across the region, with its own universities and media.

Throughout Xinjiang, the Han and Uighur communities live almost entirely separately. At one bazaar nearly all the patrons and merchants were Uighur, and blamed rising prices on new arrivals.

“The government has plenty of money but any subsidies we’re entitled to just get taken by officials,” said Abduljan, who was buying lamb. “But we can’t do anything, we have no voice, no power.”

Almost none of about two-dozen Han Chinese living in Hotan interviewed by AFP spoke Uighur. “Even if these policies do manage to attract Han to places like Hotan it doesn’t mean they will intermingle,” Leibold told AFP. “They’ll just live in segregated communities and they’ll be guarded by the People’s Armed Police,” he added. “To create a truly cohesive society you need first and foremost trust, and interethnic trust is in extremely short supply.”

More than 300,000 people live in Hotan, but at night it is a ghost town. In 2011, 18 people were killed in an assault on a police station, according to authorities, who say all the attackers who mounted a fatal car crash in Beijing’s Tiananmen Square 18 months ago were from Hotan.

Now most Han are afraid to go out after sunset, and those who gather for nightly dances under a Mao Zedong statue in the main square are guarded by armed police.

The security presence is ubiquitous, and many Uighurs similarly avoid the streets during darkness, citing harassment in the form of constant identity checks and probing questioning. “The police, the checkpoints, the guns,” said a Uighur man who refused to give his name. “It’s all here to make the Han feel safe.”