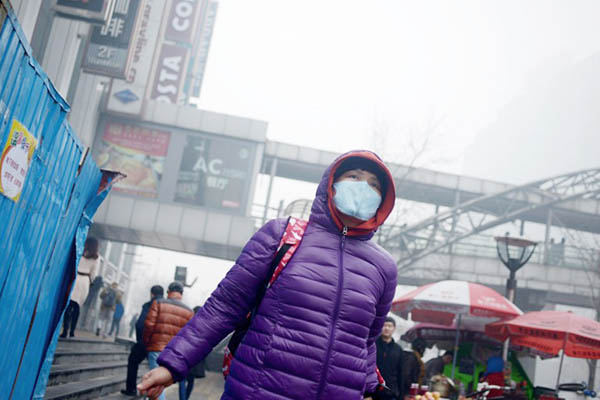 Northern China choked under some of the worst smog this year on Monday, with levels in Beijing soaring to 22 times healthy limits, triggering the city’s second-highest pollution alert on the eve of global climate change talks.

Heavy haze blanketed the cities after President Xi Jinping arrived in Paris for the key discussions that will largely focus on China, the world’s largest emitter of greenhouse gases. Concentration of PM2.5, tiny airborne particles that embed deeply in the lungs, reached over 560 micrograms per cubic meter in the capital, according to the U.S. embassy—well over the recommended maximum of 25 micrograms.

Beijing issued an orange-level pollution alert over the weekend, the highest of the year, with residents advised to stay indoors and some industrial plants ordered shut. “You can’t even see people standing directly in front of you,” wrote one disgruntled netizen on Chinese Twitter-equivalent Sina Weibo. “It feels like even the subway station is full of haze.”

Xi is in Paris for the first day of the U.N. Conference of Parties (COP21) summit, which aims to strike a global deal limiting dangerous climate change. The Asian giant is estimated to have released between nine and 10 billion tons of carbon dioxide in 2013, nearly twice as much as the United States and around two and a half times the European Union. It pledged last year to peak carbon dioxide output by “around 2030”—suggesting at least another decade of growing emissions.

Most of the country’s carbon emissions come from coal burning in power factories and homes, which spikes in winter along with demand for heating, which also causes smog.  The pollution has been linked to hundreds of thousands of premature deaths, becoming a major source of popular discontent with the government.