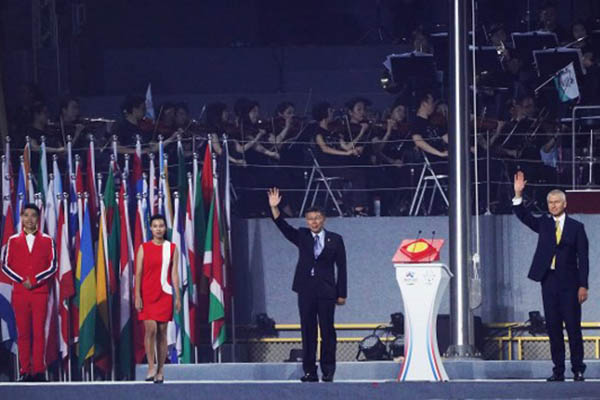 China boycotted the opening ceremony of the World University Games hosted by Taiwan on Saturday in the latest reflection of deteriorating relations between the two sides.

The biennial Summer Universiade, dubbed the “Little Olympics,” is the largest-ever sporting event Taipei hosts but it has also highlighted tensions with Beijing and the island’s struggle for international recognition. It is the first time Taiwan has held the Games, but even on home turf it must compete as “Chinese Taipei” and is unable to fly its national flag or play its national anthem because of Beijing’s sensitivities.

The two sides split after a civil war in 1949, but Beijing still sees the self-ruled island as part of its territory and objects to any official diplomatic recognition of Taiwan. Relations have deteriorated since Tsai Ing-wen of the independence-leaning Democratic Progressive Party (DPP) took office in May last year, with Beijing cutting off all official communications.

At the opening event, Tsai was introduced as the president of “the Republic of China,” Taiwan’s official name, which China does not recognize. She waved to the audiences but did not give a speech.

Thousands of student athletes from around the world donned their team uniforms or traditional dress and walked behind the sign showing the name of their country and their national flags to the cheering crowd in Taipei Stadium. However, no Chinese athletes showed up to walk behind the staffer holding China’s national flag. Local media said China was absent due to the reference of Tsai as president.

Taipei’s mayor Ko Wen-je is widely seen to have secured Chinese athletes’ attendance during his visit to Shanghai in July to attend a city exchange forum. But he said he had drawn the line at Chinese officials’ request for Tsai only to be called “leader” at the opening ceremony, not “president.”

In the current climate, some expected Chinese athletes to boycott the Universiade entirely. Instead, they will compete in individual events but sit out the team sports, citing a clash with their own national games.

Outside the stadium, there were chaotic scenes when dozens of protesters opposing the government’s pension reforms scuffled with pro-DPP groups briefly before police separated them. Protest groups also forced some buses taking athletes to the event to detour and later blocked an entrance to the stadium, causing a major delay in the athletes’ procession in the ceremony.

The International University Sports Federation called for a review of future arrangements after the incident. The rest of the opening ceremony on Saturday night showcased Taiwanese culture and lifestyle, including indigenous dance and songs as well as performances using electric scooters.

Pop star Leehom Wang performed near the end of the show before baseball player Chen Chin-feng lit the Universiade flame to formally open the games, followed by a firework show.