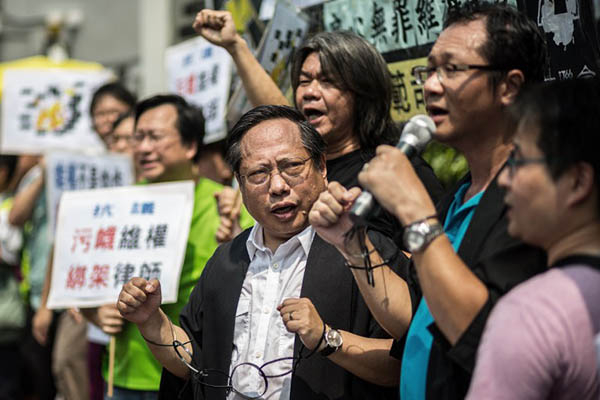 A protest in Hong Kong against China’s crackdown on rights activists. Anthony Wallace—AFP

Nearly 200 people have been questioned or detained over past week as part of crackdown on rights activists.

Chinese police are holding two human rights lawyers and an activist on suspicion of “inciting subversion of state power”, according to a police notice circulating on social media.

Lawyers Xie Yang and Sui Muqing as well as activist Gou Hongguo are being held on the state security charge, according to the notice and rights watchdog Amnesty International, and if they are tried and convicted, could face up to 15 years in prison.

Xie Yang was involved in a case at the heart of the crackdown on lawyers—a police shooting at a train station in northeast China that sparked an online outcry about violence by law enforcers. The three are not members of the Fengrui law firm, which had many of its lawyers detained.

“The use of state security charges is chilling, and only underlines the ferocity of the attack against rights lawyers,” William Nee, a China researcher at Amnesty International, said in an e-mail.

A wide-ranging crackdown on dissent has been under way since President Xi Jinping took office two years ago, with scores of government critics detained and dozens jailed. The dozens of lawyers and activists detained this week had used the legal system to challenge the government and Party’s authority.

China has brought the full force of its state media to bear in an attempt to shape public opinion. “Lawyers should safeguard justice in the courtroom with the application of their knowledge, morality and skill, not undermine the law by rabble-rousing in the streets,” read an editorial from the official Xinhua news agency.

Chinese authorities have also instructed domestic media to only use information from official government media. “All websites must, without exception, use as the standard official and authoritative media reports with regards to the detention of trouble-making lawyers,” read a notice sent to news organizations and posted on the website China Digital Times, a website that monitors Chinese media and Internet. “Personnel must take care to find and delete harmful information; do not repost news from non-standard sources.”