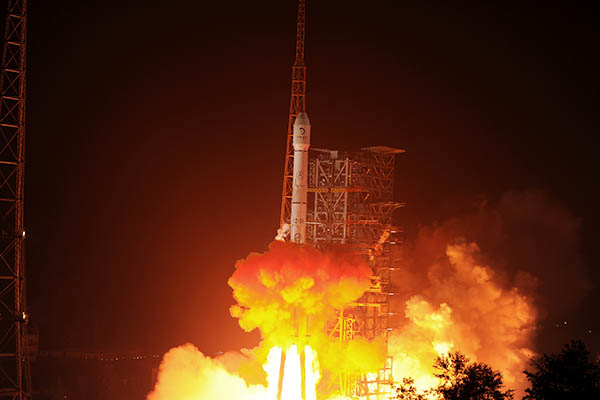 A probe carrying the country’s first lunar rover is scheduled to make touchdown at 9:40 p.m.

China will attempt to land a probe carrying the country’s first lunar rover on the moon Saturday in a major breakthrough for its ambitious space program.

The spacecraft is expected to make touchdown at 9:40 p.m., state broadcaster China Central Television (CCTV) said, 12 days after the Chang’e-3 mission blasted off on a Long March-3B carrier rocket.

China is aiming to become the third country to carry out a rover mission, following the United States and former Soviet Union, which also made the last soft landing on the moon 37 years ago.

“China’s lunar probe Chang’e-3 is expected to land on the moon at 21:40 BJT (Beijing Time) on Saturday,” CCTV posted on Weibo, a Chinese version of Twitter. “The 12-minute autonomous landing will be the key to the success of the task,” it said.

The probe is expected to touch down on an ancient 400-kilometer wide plain known in Latin as Sinus Iridum, or The Bay of Rainbows.

Landing is the “most difficult” part of the mission, the Chinese Academy of Sciences said in an online post written on the official Chang’e-3 Weibo page.

The landing craft uses sensors and 3D imaging to identify a flat surface. Thrusters are deployed 100 meters from the lunar surface to gently guide the craft into position. The probe, which is also fitted with shock absorbers in the legs to cushion the impact of the landing, will “free-fall” for the crucial final few meters of descent.

“Chang’e-3 is completely relying on auto-control for descent, range and velocity measurements, finding the proper landing point, and free-falling,” Chang’e-3’s microblog said. “At this stage, the Earth base is effectively powerless, and there is only about 10 minutes to finish the process.”

Karl Bergquist, international relations administrator at the European Space Agency (ESA), who has worked with Chinese space officials on the Chang’e-3 mission, said the key challenge was to identify a flat location for the landing.

“I was told by Chinese space officials that the lander and rover are each equipped with a camera and that when the rover separates from the lander they will both take a picture of each other from distance which will then be sent back to Earth,” he said. “I am sure that all those involved in this project in China will feel a great relief and elation when they obtain such images, just like we would do too here at ESA in a similar situation.”

After reaching the lunar surface, the module will release its rover, which can climb slopes of up to 30 degrees and travel at 200 meters per hour, according to the Shanghai Aerospace Systems Engineering Research Institute.

The Chang’e-3 mission is named after the goddess of the moon in Chinese mythology and the rover vehicle is called Yutu, or Jade Rabbit, after her pet.

The landing will mark the latest step in an ambitious space program that is seen as a symbol of China’s rising global stature and technological advancement, as well as the Communist Party’s success in reversing the fortunes of the once impoverished nation.

It comes a decade after the country first sent an astronaut into space, and ahead of plans to establish a permanent space station by 2020 and eventually send a human to the moon.

CCTV will be airing a live broadcast ahead of the landing, the state broadcaster said on its microblog. “Excited! Our journey is to the stars and oceans!” said one Weibo poster.