Home Business China to Invest $42b in Pakistan

China to Invest $42b in Pakistan 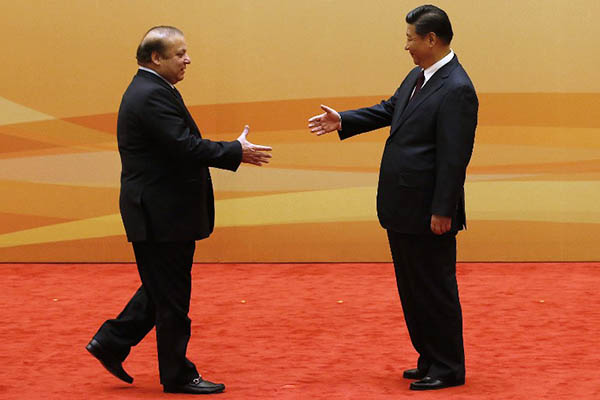 China on Saturday promised Pakistan investment worth $42 billion, an official said, as Islamabad promised to help Beijing fight what it calls a terrorist threat in its west.

Prime Minister Nawaz Sharif oversaw the signing of 19 agreements and memorandums mostly centered on the energy sector as he met Chinese President Xi Jinping in Beijing. Pakistan, a close ally of China, suffers from chronic electricity shortages and Islamabad has long sought investment in coal-fired power stations, which it sees as a solution to the problem.

Other countries have balked from such investments, sometimes on environmental grounds.

The new agreements pave the way for Chinese state-owned companies to help build at least four new power stations in Pakistan, while the deals also cover the supply and mining of coal, the prime minister’s press office said.

“The deals being signed between China and Pakistan are worth $42 billion. The whole investment is being made by China,” said Amir Zamir, spokesman for Pakistan’s ministry of planning and development. “There is no loan or aid for the energy projects, but pure investment by the Chinese,” he added.

Pakistan has for decades been China’s closest ally in South Asia, and Beijing is a major trading partner and key supplier of military technology to Islamabad.

Pakistan borders the far-western Chinese region of Xinjiang, which has seen a series of clashes and attacks on civilians that have left more than 200 dead in the past year. Beijing blames some of the region’s violence on an organized terrorist group it calls the East Turkestan Islamic Movement (ETIM) seeking independence for the region, home to the mostly-Muslim Uighur minority.

Many analysts doubt that any large-scale organization of the kind exists, while rights groups blame the violence on what they call the repression of Uighur language and culture by Beijing.

Sharif told Xi that Pakistan would “resolutely fight the East Turkestan Islamic Movement terrorist force,” China’s foreign ministry said in a statement following the meeting in Beijing. “We stand behind China on all the core issues like Taiwan and Tibet to human rights, the fight against the ETIM,” Sharif added within earshot of journalists.

Xi was forced to cancel a planned trip to Pakistan in September due to anti-government protests in Islamabad. But the Chinese president visited neighboring India the same month, signing a raft of deals.

Sharif acknowledged “somehow the circumstances led to the postponement of the visit,” adding to Xi: “I believe you will be visiting Pakistan very soon.”