China to ‘Step Up’ Troop Deployment in India Border Row 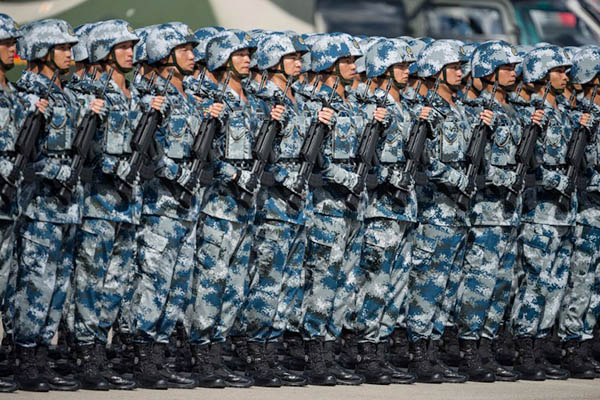 China warned on Monday that it would step up its troop deployment in a border dispute with India, vowing to defend its sovereignty at “whatever cost.”

The standoff started more than a month ago after Chinese troops started building a road on a remote plateau, which is disputed by China and Bhutan. Indian troops moved in to the flashpoint zone to halt the work, with China accusing them of violating its territorial sovereignty and calling for their immediate withdrawal.

“The crossing of the mutually recognized national borders on the part of India… is a serious violation of China’s territory and runs against the international law,” Chinese defense ministry spokesman Wu Qian told a press conference. “The determination and the willingness and the resolve of China to defend its sovereignty is indomitable, and it will safeguard its sovereignty and security interests at whatever cost,” he added.

Chinese “border troops have taken emergency response measures in the area and will further step up deployment and trainings in response to the situation,” he said.

The spokesman did not give any details about the deployment.

India and China have both said they have foreign support for their positions on the conflict. Bhutan has said construction of the road is “a direct violation” of agreements with China. Bhutan and China do not have diplomatic relations.

India, which fought a war with China in 1962 over a separate part of the disputed Himalayan border, supports Bhutan’s claim. But India should “not have any illusions” that its position will prevail, Wu said.

“The history of the PLA [People’s Liberation Army] over the past 90 years has proven that our resolve to safeguard [China’s] sovereignty and territory… are indomitable,” he said. “It is difficult to shake the PLA, even more difficult than to shake a mountain.”

India and China have vied for influence in South Asia, with Beijing ploughing large sums into infrastructure projects in Nepal, Sri Lanka and Bangladesh. Bhutan has remained closely allied to India.