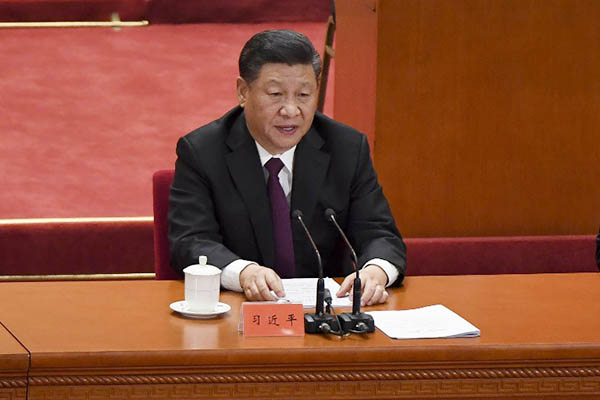 The leaders of both the United States and China want “stable progress” in ties, Chinese President Xi Jinping said during a phone call on Saturday with his American counterpart Donald Trump.

The Xinhua news agency quoted Xi as saying China and the U.S. are working to implement the terms of the trade war truce reached between the two leaders earlier this month. During the call, Xi expressed the hope that “both teams can meet each other halfway and reach an agreement beneficial to both countries and the world as early as possible,” according to Xinhua.

Washington and Beijing have imposed tit-for-tat tariffs on more than $300 billion worth of goods, and the bruising trade conflict has spooked markets worldwide.

Relations between the world’s top two economies are “now in a vital stage,” Xinhua quoted Xi as saying during the Trump call. “China attaches great importance to the development of bilateral relations and appreciates the willingness of the U.S. side to develop cooperative and constructive bilateral relations,” Xi said, according to Xinhua.

Tensions have eased since Trump and Xi met on the sidelines of the G20 summit in Argentina and agreed to a 90-day truce as they try to negotiate an end to the trade war. Signs of progress since that meeting include the absence of new threats from Trump. And China’s customs administration announced on Friday it had approved U.S. rice imports, after its major state-owned grain stockpiler said it had resumed buying U.S. soybeans.

Beijing also announced it would suspend extra tariffs added to U.S.-made cars and auto parts starting Jan. 1. China is also targeting intellectual property theft in the country—one of the main sticking points in the dispute with the U.S.

Trump initiated the trade war because of complaints over unfair Chinese trade practices—concerns shared by the European Union, Japan and others.