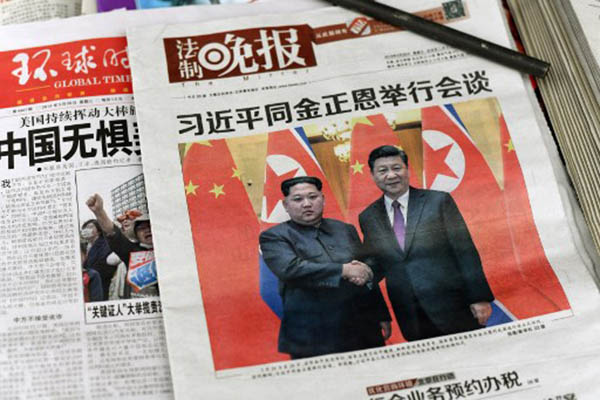 North Korea’s Kim Jong-Un told Chinese President Xi Jinping that it was his “solemn duty” to make Beijing his first overseas destination and invited him to visit Pyongyang, the North’s official news agency reported on Wednesday.

The relationship between the North and its key protector has soured in recent years, with China increasingly exasperated by its neighbor’s nuclear antics and recently showing a new willingness to enforce United Nations sanctions imposed on it over its weapons and missiles programs. But KCNA quoted Kim as saying at a banquet in Beijing: “There is no question that my first foreign visit is to the Chinese capital. This is my solemn duty as someone who should value and continue the DPRK-PRC relations through generations.”

The North’s leader invited Xi to make an official visit to Pyongyang “at a convenient time and the invitation was accepted with pleasure,” KCNA added.

Such a trip by a current Chinese Communist Party general secretary and national president would be extremely unusual.

The last such visitor was Hu Jintao in 2005, and the last top Chinese leader to go was the then premier Wen Jiabao in 2009—although Mao Zedong’s son Mao Anying was killed fighting for the North during the Korean War.

In his speech Kim said the North Korean and Chinese peoples have “sacrificed lives and shed blood in their common struggles for decades, have experienced that their lives are inseparable, and realize how important regional peace and stability is for these two neighbors separated only by a river.” He pledged to “strengthen and elevate” the relationship between the two countries, calling it “a noble heritage passed on by past predecessors.”

KCNA described Kim’s visit as unofficial and said it ran from Sunday to Wednesday, implying that Kim’s armored train entered China at the weekend and crossed back into North Korea early Wednesday after leaving Beijing on Tuesday afternoon.

Kim was accompanied by his wife Ri Sol-Ju and several officials and dignitaries, KCNA said, without mentioning his sister Kim Yo-Jong, who acted as his special envoy to last month’s Winter Olympics in the South, which triggered an unprecedented flurry of diplomatic activity focused on the flashpoint peninsula.