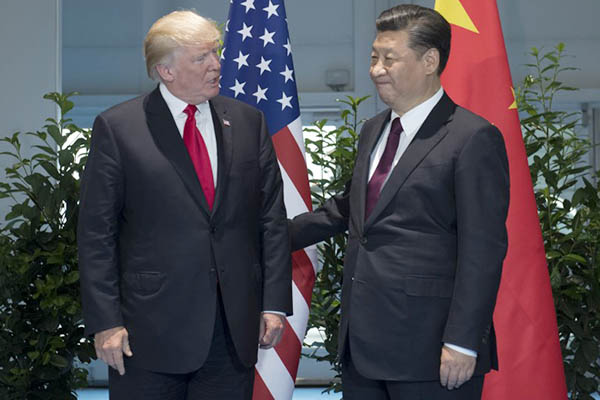 Trade tensions between the United States and China heated up on Tuesday as Beijing warned that it “will not sit idle” if a U.S. probe into its intellectual property practices leads to sanctions.

“We will stand up to any country that unlawfully forces American companies to transfer their valuable technology as a condition of market access. We will combat the counterfeiting and piracy that destroys American jobs,” Trump said. “Washington will turn a blind eye no longer,” Trump said, vowing to safeguard copyrights, patents and other intellectual property that are “vital to our security and to our prosperity.”

The president said the U.S. would no longer tolerate Beijing’s “theft” of U.S. industrial secrets, long a concern of major foreign corporations seeking a share of the huge Chinese market. “We will engage in a thorough investigation and, if needed, take action to preserve the future of U.S. industry,” Lighthizer said.

“If the U.S. side take actions that impair the mutual trade relations, disregarding the facts and disrespecting multilateral trade rules, China will not sit idle,” the statement said.

The ministry said the country “is definitely going to adopt all appropriate measures to vigorously defend the lawful rights and interest of China.”

The United States is China’s second-largest trading partner after the European Union, but Washington and Beijing have seen their relations grow increasingly fraught since a promising summit between Trump and China’s Xi Jinping in April.

The new intellectual property inquiry joins numerous investigations launched by Washington into Chinese trade practices, notably those concerning steel and aluminum and their national security consequences, which the Trump administration began earlier this year. However, the start of a U.S. probe will not immediately result in open confrontation.

Lighthizer will first need to reach a preliminary finding of unfair practices by China before opening a formal investigation, which could take as much as a year, administration officials said.

The Chinese commerce ministry said the country has “always been paying high attention to intellectual property right protection, continuously perfecting the legislation,” and that the progress it has made on that front is “obvious to all.”

Yang Zhao, chief China economist at Nomura research firm, said a U.S. tariff penalty would only cause minor impacts on the Chinese economy and fall short of a full blown trade war. “The decision to launch this probe may raise the risk of tit-for-tat trade protectionism,” Zhao said in a note. “But we believe the Trump administration’s strategy is more likely to be one that looks to raise its bargaining power to reach a better longer-lasting solution over the start of, or the threat of, a real trade war.”

Since launching his successful run for the White House and then taking office, Trump has frequently accused China of undermining the U.S. economy. The bilateral U.S. trade deficit with China approached $350 billion in 2016, and Trump has repeatedly blamed Chinese imports for gutting employment in U.S. sectors such as steel.

Last week, Washington announced preliminary sanctions against Chinese imports of aluminum foil. But so far, the U.S. has not imposed heavier trade measures on Chinese goods.

On Thursday, Trump reiterated the suggestion that he could soften his position on trade if Beijing were to do more to help rein in nuclear-armed North Korea. China said it would halt iron, iron ore and seafood imports from North Korea starting on Tuesday, in accordance with new U.N. sanctions that Beijing voted to approve.

U.S. administration officials, however, have denied any link between the latest trade action and Pyongyang’s nuclear ambitions.

Beijing echoed this view on Monday, with the foreign ministry saying the two matters were “totally different.”

Despite Monday’s expected action, Trump has so far refrained from making good on threats of retaliatory trade measures against China. This includes in particular concerns over Beijing’s requirement that foreign companies establish local joint ventures. According to Washington, this can mean surrendering technological know-how to Chinese partners.