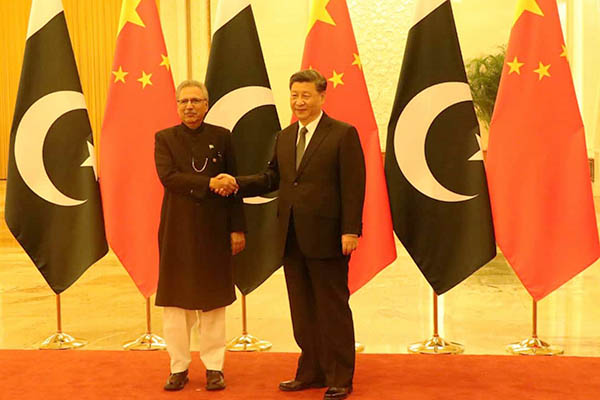 China wants to see a united and strong Pakistan that is stable and prosperous, President Xi Jinping said on Tuesday during a meeting with Pakistan President Arif Alvi in Beijing.

Alvi was in China on a two-day trip during which he discussed the fight against COVID-19 with the Chinese leadership and signed several Memorandums of Understanding on various matters.

“China will stay committed to our ironclad friendship and will expand our strategic cooperation,” President Xi said during the meeting at the Great Hall of People. No matter how the international landscape might change, he said, China would always stand firmly by Pakistan. Beijing has backed Pakistan in stepping up its constructive role in regional and international affairs, he added.

Terming the two-day visit by Alvi as “very important,” the Chinese leader said his country was striving to achieve a final victory against the novel coronavirus and the Pakistani leader’s presence at this juncture was an “expression of firm support to us and this speaks volumes of profound friendship towards the Chinese people and emphasis he put on our bilateral ties.”

Xi also expressed his heartfelt thanks to the people and Government of Pakistan for doing their best to aid in recovery efforts when China was fighting against the coronavirus outbreak.

President Alvi, during the meeting, said he was visiting China to show solidarity with the people and the leadership of China while they were successfully fighting the COVID-19 outbreak. He said China had shown the world its ability to deal with the challenge and set an example for other countries, which were still dealing with the deadly disease.

The novel coronavirus, COVID-19, originated in China’s Wuhan city late last year before spreading across the world. It has killed over 3,200 people in the country and Beijing has only recently posted numbers that suggest it is now recording more new cases from foreign travelers than through domestic spread. Pakistan currently has 243 cases of COVID-19 nationwide, with health officials warning that the number is likely to rise in the coming days.

Another MoU was signed on strengthening cooperation on pest and disease control between the Chinese Ministry of Agriculture and Pakistan’s Ministry of Food Security and Research.