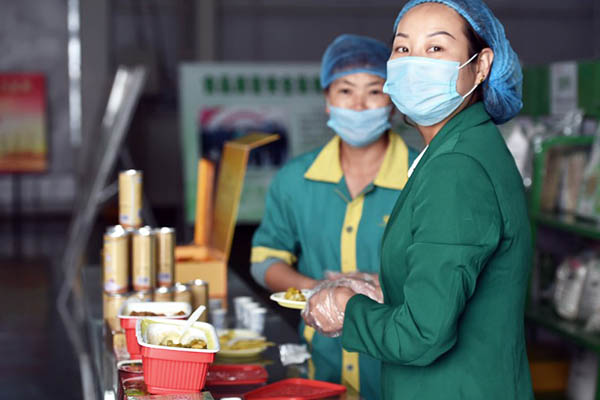 The wine-swilling co-founder of Sai Wai Xiang Halal Foodstuff Co. enjoys his pork and does not follow Islam, but still sells more than $50 million-worth of food to Muslims across Asia and the Middle East.

The company is at the forefront of a Chinese drive into the global halal food and beverage market, exporting as far away as Saudi Arabia. Businessman Deng Zhijun bills his wares as “products with Muslim ethnic flavor”, but has difficulty recalling some of Islam’s basic dietary tenets.

“Muslims definitely don’t smoke and don’t drink alcohol,” he said over a lunch at the company, in a garden lined with caged peacocks, macaws and chickens. “There’s also some kind of meat they don’t eat, but I forgot.”

His half-knowledge is typical of China’s complicated relationship with Islam, which officially has more than 23 million adherents in the country. Some independent estimates put it as high as 50 million—which would put China among the world’s top 10 Muslim nations.

Deng’s company is based in Ningxia, a western region a third of whose six million population are Hui. The group is a separate minority under Beijing’s classification policies even though most are essentially from the Han ethnic majority, differentiated only by being Muslims.

Violence in Xinjiang, the homeland of the other main Muslim minority, the Uighurs, has killed hundreds, with Beijing attributing it to Islamic extremism and foreign influence, while activists blame draconian restrictions on religion and culture. In a promotional video playing at Sai Wai Xiang’s factory—set up 14 years ago—a table of happy Chinese diners clink glasses of beer before tucking into their meal.

“Drinking red wine is very good for the body and has health benefits, just like eating halal food,” said Deng, who recalled a recent trip to Bordeaux and said he often finishes a bottle of the local Ningxia vintages with dinner.

The global halal food and beverage market is projected to grow to $1.6 trillion by 2018, according to a report from the Dubai Chamber of Commerce and Industry, up from $1.1 trillion in 2013. Deng and other company executives pointed to President Xi Jinping’s “One Belt, One Road” initiative that aims to boost trade with a host of countries across South Asia and the Middle East, and he expects a windfall of incentives for halal food.

But there are concerns over how strictly halal standards are followed in China.

Last year, hundred of Muslims took to the streets in Xi’an to protest the sale of alcohol in halal restaurants. In Qinghai province a crowd destroyed a bakery after pork sausages and ham were found in its delivery trucks. Such fears have an impact in potential export markets, and food safety scares are common in China, from gutter oil to milk powder.

The integrity of Chinese halal food was “questionable,” Miriam Abdul Latif, a professor of food science and a halal expert at the Malaysian University of Sabah, told AFP, citing examples of “fake halal documents or certificates.”

To build consumer trust, Latif said, Chinese companies should have their products inspected by certification bodies from Muslim countries.

But the issue goes to the heart—or perhaps the stomach—of the relationship between religion and the state. China’s current halal certification system is a patchwork of local regulations, with varying strictness. Mosques technically have the right to inspect nearby facilities, but ultimate power rests with local government Ethnic and Religious Affairs Bureau.

At a high-level national political meeting in Beijing last month, Ma Guoquan, a delegate from Ningxia, called for a single national standard for halal food, and improved enforcement. “There are many problems regarding halal food management that can’t be ignored,” Ma said, according to the Ningxia Daily newspaper. But some say national laws would be anathema to the ruling party’s official atheism.

“This kind of legislation would be contrary to the principle of secularism,” Xi Wuyi, a Marxism expert at the Chinese Academy of Social Sciences wrote on China’s Twitter-like Weibo in March. “It could threaten China’s national security strategy.”

At the same time some Muslims complain over too much government interference in their religion. Away from the high-level politics of policing halal food, many of the faithful in Ningxia rely on personal relationships to guarantee quality.

“I know the meat I buy is halal because I know the butcher, I see him frequently at the mosque for prayer,” said rural resident Na Liang. “I know the baker, I know the family that runs the noodle shop and I know all the food I eat is halal.”