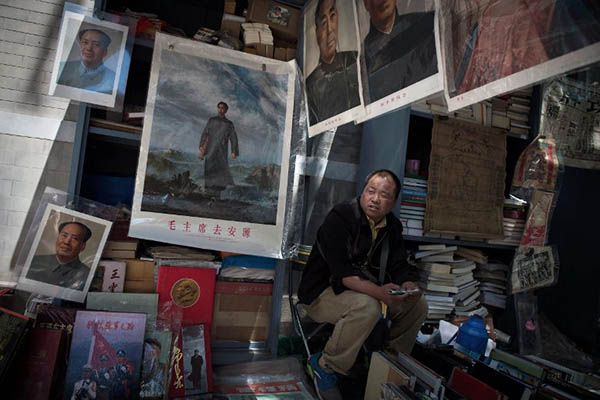 Collectors are seeking out artifacts of the chaotic time in Chinese history.

At the “East is Red” shop in Shanghai, every nook and cranny is packed with memorabilia of China’s Cultural Revolution, from small badges of Chairman Mao Zedong to gigantic posters of his iconic image.

Owner Guo Bing himself is a child of the Cultural Revolution, born in 1966, the year the chaotic and violent decade was launched on May 16. His parents named him with the Chinese character for “soldier,” a common practice at the time. But now, Guo sees profits rather than Communist Party ideals in the relics of the past, as the market booms for collectibles from a time scarred victims would prefer to forget.

“Prices have risen because of the anniversary of the Cultural Revolution,” said Guo at one of his two shops in China’s commercial hub, whose gleaming skyscrapers epitomize the country’s economic boom after the abandonment of Maoist orthodoxy. “People suffered during the Cultural Revolution,” Guo admitted, before quickly adding: “We are meeting demand. There is a market.”

Guo was a “Little Red Guard” as a child in Jiangsu province, he said, wearing his older brother’s army uniform, pinning a Mao badge to his chest and signing patriotic songs. One of them, “The East is Red,” gave him the name for his business, which has dealt in Cultural Revolution memorabilia for two decades.

For some buyers, such objects tap into nostalgia for a simpler time, when the state provided everything and society was more equal, despite the abuse the victims suffered. “It was an exciting time for kids,” Guo said. “Most collectors now are old people, younger people lag behind.”

The objects on offer range from an enameled metal plate with the slogan “Chairman Mao’s revolutionary art and literature line victory forever” to a book of cartoons published in early 1977, soon after Mao’s death and the fall of his widow Jiang Qing.

Along with the three other members of the “Gang of Four,” she was officially blamed for directing the mayhem. Once a movie actress in Shanghai, she was among a cabal of radicals with links to the city who were among the driving forces behind the Cultural Revolution. “We can remember history,” Guo said.

On a high bookshelf in the shop, a framed picture shows Mao with a mango, which became an object of veneration after the leader gifted the fruit to a group of workers in 1968.

The cult of the mango, as it is known, was even the subject of an exhibition at the Museum Rietberg in Zurich in 2013. The reproduction sells for 50 yuan ($8), Guo says—but an original would cost hundreds of dollars.

The disparity offers a opportunity for the unscrupulous to profit, and collectors and dealers said that rampant fakes are a problem for Cultural Revolution memorabilia, like other collecting categories in China.

On Chinese website Kongfz.com, an eBay-like platform for antiquarian books and other items, a search for Cultural Revolution turns up nearly 200,000 items with the most expensive an extensive collection priced at 3.0 million yuan.

“All along, people have appreciated Cultural Revolution objects,” said long-time dealer and collector Lin Ji. “Where there is a market, there are fakes,” he added, citing reproductions of Red Guard armbands as an example.

Mao badges and the Little Red Book of his thoughts and sayings were once ubiquitous in Chinese households, but collectors hope growing scarcity will increase prices over time. “There are too many things [from the Cultural Revolution]. But the good stuff is getting harder and harder to find,” said Guo, who has a prized Mao statue stored away at home, not for sale.

Despite the rampant consumerism—and Communist kitsch is also popular among some foreign buyers—the Cultural Revolution remains a sensitive topic, even 40 years after it ended. The ruling party fears that a full historical reckoning would undermine its legitimacy, strongly opposes a revival of leftist thought and shuns comparisons between Mao’s personality cult and the strong leadership of current President Xi Jinping.

The founder of the Shanghai Propaganda Poster Art Center, a private museum which includes several exhibits from the Cultural Revolution, declined to be interviewed by AFP in the run-up to the anniversary. “It’s a sensitive time right now,” said Yang Peiming. “The museum is an art museum without any other meaning.”