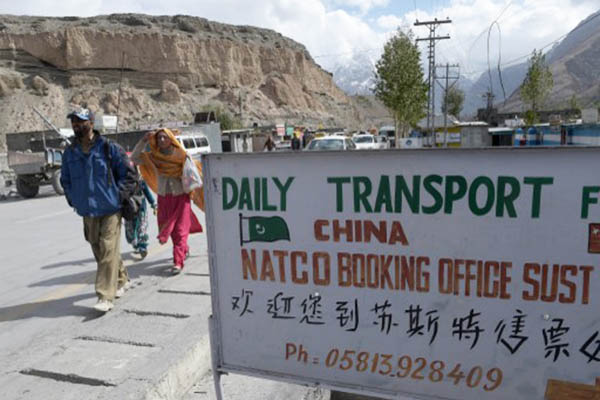 Will the China-Pakistan Economic Corridor be boom or dust for Pakistan?

A glossy highway and hundreds of lorries transporting Chinese workers by the thousands: the new Silk Road is under construction in northern Pakistan, but locals living on the border are yet to be convinced they will receive more from it than dust.

The town of Sost is gateway to millions in customs duties, with its rickety stalls of corrugated iron engraved in Mandarin and Urdu, its cross-border secret agents and its dusty petrol station’s abrupt service. It is the first stop along a new $46 billion “economic corridor” designed by China in Pakistan.

Drivers from China arrive through the Khunjerab Pass, the world’s highest paved border crossing at 4,600 meters above sea level, and unload their goods encircled by the magnificent Karakoram mountains, swirled with snow. From there, Pakistani colleagues pick up the goods and transport them the length of the country—currently to Karachi, some 2,000 kilometers away on the Arabian Sea, but in the future to Gwadar, where Beijing has been given management of the port in a grand project allowing China greater access to the Middle East, Africa and Europe.

But, until recently, the highway was cut off just south of Sost, blocked for five years by a landslide that dammed the Hunza river and birthed the 10-kilometer-long lake of Attabad, with its ice-blue glacier water. Unable to drive around the mountain, China simply tunneled through it, sending thousands of workers in a titanic effort that took more than three years and cost at least $275 million.

“We have suffered because of the lake,” joked Amjad Ali, a round-faced trader who sells clothing in the Sost bazaar, where the new Chinese highway has replaced the old Silk Road—a tortuous dirt track travelled for centuries by trade caravans.

Before the tunnel, residents of Sost had to cross the lake by boat in a journey that took at least an hour. Traffic in winter was meager. “With the tunnel, we hope business will take off and tourists flock here,” said Ali. “We are once again connected by road to the rest of Pakistan,” rejoiced another resident, Mohammed Israr.

But their optimism is tempered by fear that the trucks will simply drive on by, leaving Sost to receive, as Ali put it, “nothing but dust.”

“The Chinese care only for their own economic interest,” said Noor-e-din, another trader with a russet moustache. “We risk spending our days counting trucks as they drive past.” Islamabad, he predicted, is set to collect millions in customs duty from Sost while doing little or nothing for the town.

Israr, for his part, evoked a land grab by wealthy Chinese and Pakistanis “from below” [the south]. The latter have already approached farmers in the region in a bid to snap up their fields.

Sitting on the border of his potato field under the shade of an apple tree, Ali Qurban fears losing his beloved region in Islamabad’s grand dance with Beijing. “This is my land of Gilgit-Baltistan—not that of Pakistan or China,” the local activist and occasional poet cries. A land of peaks and glaciers, of verdant valleys and azure lakes, Gilgit-Baltistan was long a collection of small kingdoms before being attached to Pakistan in the 1970s. It does not have provincial status and its inhabitants do not have the right to vote in national elections, hence the feeling of alienation from Islamabad and the lack of a voice on the economic corridor.

But for the head of local government, Hafiz Hafeez ur-Rehman, the project is a “game-changer” for a region that should be the “prime beneficiary” as it is located on the threshold of China.

The government plans to install commercial areas and invest in hydroelectric dam projects along the future super-highway to the south, he told AFP.

Other, more shadowy political and security factors also contribute to the sense of alienation in Gilgit: such as Beijing and Islamabad’s apparent efforts to clamp down on the restive regions that surround the corridor. In Gilgit-Baltistan, the most famous local labor activist, Baba Jan, has been imprisoned for “terrorism” since 2011 for organizing an anti-government demonstration.

In the neighboring Chinese region of Xinjiang, Beijing is closely monitoring Muslim Uighurs, saying that extremists from the minority are in hiding in Pakistan—a claim that has been supported by local security sources.

For locals, it all adds up to a lack of agency. The government and the military have “paralyzed the people here,” the activist Qurban said, adding they are suppressed “as Uighurs are suppressed by the Chinese government in Xinjiang.”

“The decision-makers will decide for themselves what the benefit of the economic corridor is,” he says.

Muhammad Qasim, a Uighur now living in Gilgit whose angular face is woven with wrinkles, remembers leaving Xinjiang as a child to seek refuge in Pakistan after China’s communist revolution. He traveled, he said, by the ancient Silk Road. “At the time it was just a narrow path—no roads, no vehicles. Our only means of transport was a donkey.”

it was difficult to figure out the purpose and point of this article. contents and the title have no correlation whatsoever. it seemed more like a lament for a town called sost! a institution such as newsweek can surely do better than amateur pieces like this.

It is not fair to assume that the benefits of this project will be delivered to the local population right away. It will take some time. First, let the project finish. Then we can talk about bringing the benefits to the locals.

Having visited GB in September and Gwadar in November 2015, the sentiment amongst the locals is that nether the Silk Road nor the Port of. Gwadar will provide jobs or livlihood for the locals. The pollution caused by traffic in the fragile eco system of the northern areas will forever change the landscape. The chinese are famous polluters and the govt should ensure only emission free vehicles are used and that least 40 percent jobs should go to locals. Transfer of skills and training should take place if pakistan is to benefit.