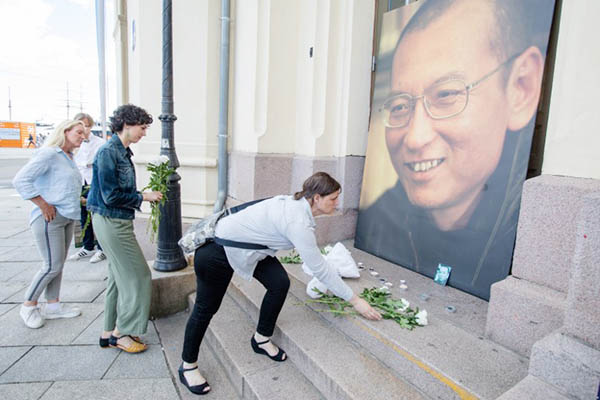 China’s Nobel laureate Liu Xiaobo died on Thursday after a battle with cancer, remaining in custody until the end as officials ignored international pleas to let him spend his final days free and abroad.

The prominent democracy advocate died aged 61, more than a month after he was transferred from prison to a heavily guarded hospital to be treated for late-stage liver cancer. Liu’s death puts China in dubious company, as he became the first Nobel Peace Prize laureate to die in custody since German pacifist Carl von Ossietzky, who passed away in a hospital while held by the Nazis in 1938.

International tributes poured in for a “hero” of democracy while human rights groups accused the government of “cruelty.”

“We find it deeply disturbing that Liu Xiaobo was not transferred to a facility where he could receive adequate medical treatment before he became terminally ill,” the Nobel committee said in a statement. “The Chinese government bears a heavy responsibility for his premature death.”

The legal bureau in the northeastern city of Shenyang said on its website that Liu succumbed to multiple organ failure, three days after being taken into intensive care at the First Hospital of China Medical University. The official Xinhua news agency, which had not mentioned his hospitalization, reported his death in English. Shortly after the announcement, the street in front of the hospital was nearly empty, with a dozen plainclothes men standing guard just outside a gate.

The writer’s death silences a government critic who had been a thorn in the side of the authorities for decades and became a symbol of Beijing’s growing crackdown on dissenting voices.

Liu was detained in 2008 after calling for democratic reforms and he was sentenced to 11 years in prison for “subversion” a year later. At the Nobel Peace Prize ceremony in Oslo in 2010, he was represented by an empty chair. “His non-violent resistance made him a hero in the battle for democracy and human rights. RIP,” German Justice Minister Heiko Maas wrote on Twitter.

Amnesty International secretary general Salil Shetty said: “Today we grieve the loss of a giant of human rights. Liu Xiaobo was a man of fierce intellect, principle, wit and above all humanity.” Germany had offered to treat Liu as recently as Wednesday, calling for a “signal of humanity” from China. The United States also said it was willing to take him in. But officials insisted that Liu was receiving treatment from top Chinese doctors since being granted medical parole following his diagnosis in late May.

“I’m sorry, Xiaobo. I’m sorry. We put forth our greatest effort, but we could not win your freedom while you were still living,” Liu’s friend and Beijing-based dissident Hu Jia said on Twitter. “But we will continue fighting for freedom for your love Liu Xia. The world is sorrowful. Your unfulfilled wish is our mission.”

In response to calls to allow Liu to leave China, the foreign ministry repeatedly said other countries should not interfere in China’s internal affairs, using the same line on Thursday before his death was announced.

In early July, Liu’s Chinese doctors said he was not healthy enough to be sent abroad for treatment, a position that was contradicted by U.S. and German medical experts invited by the hospital to examine Liu’s condition. Rights groups accused authorities of manipulating information about his health and refusing to let him leave because they were afraid he would use the freedom to denounce China’s one-party Communist regime.

Liu was arrested nine years ago after co-writing ‘Charter 08,’ a bold petition that called for the protection of basic human rights and reform of China’s political system. Liu is also known for his role in the 1989 Tiananmen Square protests in Beijing.

His wife, Liu Xia, was placed under house arrest in 2010, but she was allowed to see him at the hospital. Her fate will now worry human rights groups, which had urged the government to free her alongside Liu Xiaobo. “We must do all we can to end Liu Xia’s illegal house arrest and surveillance and ensure that she is no longer persecuted by the authorities,” Amnesty’s Shetty said.