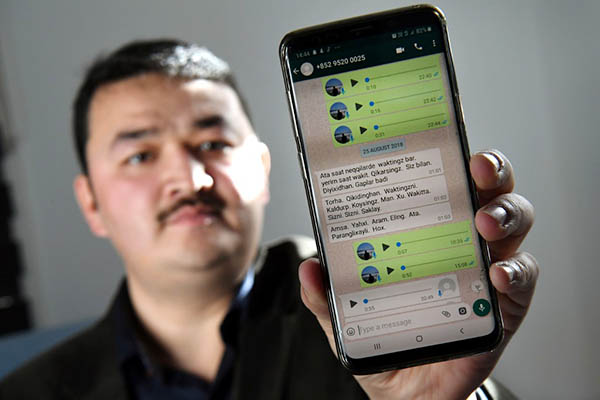 Refugees who have fled China continue to live in fear amid threats to their relatives back home, menacing text and voice messages

Muslims who escaped China’s crackdown in Xinjiang still live in fear, saying new homes abroad and even Western passports afford them no protection against a state-driven global campaign of intimidation.

With menacing text and voice messages, and explicit threats to relatives still living in Xinjiang, China’s powerful state security apparatus has extended its reach to Uighurs living in liberal democracies as far away as New Zealand and the United States, in a bid to silence activists and recruit informants.

The Communist Party’s dragnet in Xinjiang has swept an estimated one million ethnic Uighurs and other mostly Muslim minorities into “vocational education centers” that numerous studies and reports have exposed as harsh internment camps. For those who managed to get out and settle overseas, the search for a true safe haven has remained elusive as they complain they and their families have been remotely harried and harassed to the point of desperation.

Guly Mahsut, who fled to Canada, says she became suicidal and was hospitalized after being bombarded with messages from Xinjiang police threatening her family in the troubled province. “You should have been more cooperative. Don’t become the source of misfortune for your relatives and family in Toksun. You should be more considerate of your family,” read one message, allegedly from an official named “Kaysar.”

The 37-year-old believes she was targeted because she spoke out against authorities online, and has helped stateless Uighurs seek help abroad. She received messages from relatives—including her younger sister—pleading with her to “cooperate” with authorities.

Mahsut is one of more than a dozen Uighur exiles AFP interviewed across four continents that gave access to scores of text and voice messages—purportedly from Chinese security operatives—demanding their silence or cooperation. Together they point to a systemic effort to infiltrate diaspora communities, recruit informants, sow mistrust and stifle criticism of the regime.

Shir Muhammad Hasan managed to get to Australia in 2017. Having secured refugee status, he thought he was safe. Little more than a year later, the sinister messages began to arrive. “I suppose your family already told you that I have been searching for you?” read the first.

More texts followed, in turn demanding the 32-year-old turn over dossiers about his life, and then came persistent requests to arrange a time to “get to know each other better.”

“I told you to send me a brief introduction of yourself, but you didn’t,” the sender said in a local Uighur dialect, punctuated with a smattering of Mandarin Chinese, adding: “We should sit down and have a chat.” The barrage lasted six months and then abruptly stopped, leaving Hasan in turmoil—unsure if and when the torment will begin again.

AFP has no way of independently verifying who sent these or similar messages. They were sent using encrypted WhatsApp accounts and linked to inactive Hong Kong cell numbers or in some cases “ID spoofed” numbers that mask the source.

The Chinese foreign ministry and the Xinjiang government did not respond to request for comment. But many Uighurs abroad offer strikingly similar testimony: Their families in Xinjiang are approached, they then begin to send unusual questions or demands, before ultimately direct contact is made from suspected security officials via secure messaging services.

One Uighur man now living with his wife in the U.S. said his family in Xinjiang were asked to “provide information about my school, status, how I was able to go overseas.”

“When I asked them ‘why do you need this information?’ they told me that they need to fill some kind of form,” he explained. Other families in Xinjiang were asked for phone numbers of overseas relatives that allowed the assault of texts and phone messages to begin.

The harassment has had a devastating impact for many as they are shackled by fears for the fate of loved ones left behind if they do not comply. Arslan Hidayat lives in Istanbul, which had opened its doors to fellow Turkic-speaking Muslims. He was not targeted directly, but nationalist trolls have bombarded his Facebook blog. Australian-born, he wants to speak out, but older family members—including his mother-in-law, whose husband is in detention—believe silence will limit the authorities’ wrath.

China’s bid to create a network of informants has also sown mistrust and friction within Uighur communities abroad. For much of the last decade, Uighur students who received a scholarship to study overseas were asked for a raft of sensitive information, and some believe they were effectively asked to become spies.

According to James Leibold, an expert on ethnic relations in China and a professor at Melbourne’s La Trobe University, the intimidation is systematic and methodical. “The reach of the Chinese party-state now is far more extensive, and it has, in some regards, violated the sovereignty of countries across the globe, by interfering in the affairs of citizens of different countries,” he warned.

Leibold added Uighurs with overseas connections are seen as a potential security risk: “The best way to deal with that was to send them back to Xinjiang where they could be monitored or ‘re-educated’.” As for those who have moved overseas permanently, he said Beijing wants them “to stay quiet about this issue, not lobby politicians, not to speak with the media, not to cause trouble for the Chinese Embassy and consulates.”

Similar actions overseas have been reported against Tibetans, political dissidents, Taiwanese activists, adherents of the spiritual group Falun Gong as well as Chinese students overseas. The assault has led some Uighurs—even those with foreign nationality or permanent residency abroad—to believe nowhere is safe from China’s police state.

In the past five years, Thailand and Egypt have rounded up Uighurs and sent them back to China. But even in open democracies such as New Zealand and Finland, the picture is bleak. Shawudun Abdughupur fled to Auckland after witnessing inter-ethnic riots in July 2009 that left hundreds dead.

Despite now being a New Zealand citizen, he remains reluctant to speak publicly, fearing for himself and for his 78-year-old mother, who he believes is in a camp. “I can’t say too much,” he told AFP, fighting back the tears in his first on-camera interview. The 43-year-old added: “I don’t know if the New Zealand government can protect me. How can they protect me?” After he refused to give details of his meetings with other Uighurs, he received this chilling message: “We can find you. We are in New Zealand.”

When Abdughupur reported the incident to the New Zealand police they treated it like any other nuisance call, referring him to the non-profit online safety organization Netsafe, who then referred him back to law enforcement. New Zealand police, like several of their counterparts worldwide, said they could not discuss the cases for privacy reasons.

Halmurat Uyghur, a 35-year-old who lives north of Helsinki, said he reported threatening messages to the Finnish police on several occasions but nothing changed. “I don’t feel safe, who knows what will happen next,” he said.

One former senior U.S. national security official confirmed the issue of China pursuing so-called “fugitives” abroad had been raised with Beijing “through law enforcement channels and also at the top level.”

Current U.S. officials acknowledged reports of Uighur intimidation in America but declined requests to comment on the record. Ben Rhodes, who spent eight years as a senior national security aide during Barack Obama’s presidency said democracies could mitigate some of China’s actions but allies would need to “close ranks.”

Beijing was “usually intransigent about things that they felt dealt with internal matters,” he said. He added: “The way to really deal with it would be for the United States to rally other countries to collectively stand up to the Chinese on this.”