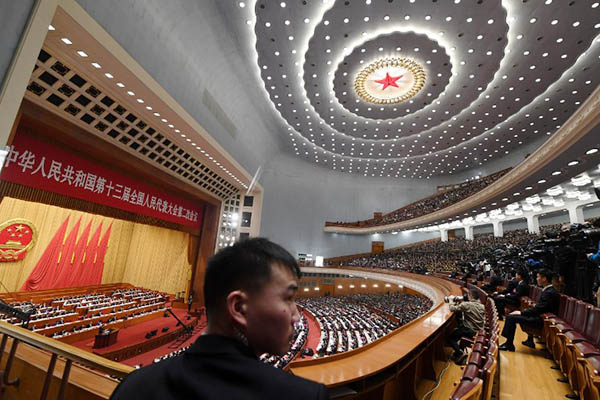 A glance at how the National People’s Congress works

Nearly 3,000 delegates from across China gathered in Beijing on Tuesday for the start of the annual session of the rubber-stamp legislature, the National People’s Congress (NPC).

The two-week gathering will provide a glimpse into China’s politics and priorities, though most of the bills have already been decided by Communist Party leaders well in advance. As economic growth slows and officials seek an end to the trade war with the United States, all eyes will be on any steps taken to prop up the economy.

Here is a glance at how the NPC works:

Officials said 2,948 delegates attended the opening of the NPC session to hear Premier Li Keqiang unveil economic plans and a lower 2019 growth target at the cavernous Great Hall of the People across Tiananmen Square. Two-thirds of members come from the ruling Chinese Communist Party, which has been in power since 1949. It is made up of representatives from all 31 provinces, municipalities and autonomous regions, including Hong Kong and Macau, as well as the military.

While they collectively meet once a year to vote on major bills, approve the budget and endorse personnel nominations, the Standing Committee of the NPC meets every two months to pass other laws or amendments. But legislation is decided by party leaders prior to the session, leading to the NPC being derisively described as a “rubber-stamp” parliament.

Last year, it voted 2,958-2 in favor of abolishing presidential term limits, opening the door for President Xi Jinping to rule for life.

Running concurrently is the gathering of the Chinese People’s Political Consultative Conference (CPPCC).

A largely ceremonial advisory body, its members read like a who’s who of China and include actor Jackie Chan and former NBA star Yao Ming. Its discussions are relatively low stakes: representatives provide lawmakers with policy suggestions that have little impact on national policy.

Both meetings are collectively known as the “two sessions,” or “lianghui” in Chinese.

China goes to great lengths to ensure no embarrassing incidents occur during the sessions, which is touted by the Communist Party as proof that it answers to the people despite a monopoly on power.

The area surrounding Tiananmen Square and the Great Hall is on virtual lockdown. In the past, factories closed to guarantee blue skies, though this year got off to a very smoggy start.

Plainclothes policemen seem to lurk on every corner and political dissidents are rounded up and asked—or sometimes forced—to go on “vacation” somewhere far away from the capital.

This year, self-service was suspended at petrol stations, fireworks sales were halted, chemical production plants were shut and the IDs of anyone buying dangerous chemicals were recorded, according to local media. Everything is perfectly choreographed to project an image of perfection, right down to the attendants with giant thermos flasks who top up delegates’ teacups in perfect synchrony.

The meetings are also the one time each year when the country’s most powerful politicians are all in one place, making it a key venue for political horse-trading.

The biggest item on the agenda is a foreign investment law that is expected to pass on March 15, the last day of the session. The legislation will ban the illegal transfer of technology and “illegal government interference” in foreign businesses, a previously published draft showed.

This is aimed at assuaging concerns about China’s foreign investment environment, with forced technological transfers to Chinese business partners being a key sticking point in the China-U.S. trade negotiations.

The event is also closely watched for signals about what measures the world’s second-largest economy will take to prop up its slowing growth, dragged down by a huge debt burden.