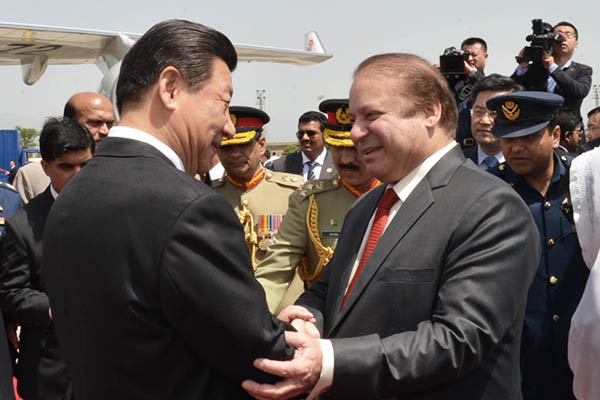 China Pakistan Economic Corridor plan, worth $46 billion, will cut thousands of kilometers of route to transport oil from Middle East to China.

Chinese President Xi Jinping arrived in Islamabad Monday to unveil a $46 billion investment plan that Pakistan hopes will end a chronic energy crisis and transform it into a regional economic hub.

With the plan, known as the China Pakistan Economic Corridor (CPEC), Beijing hopes to increase investment in Pakistan as part of its ambitions to expand its trade and transport footprint across Central and South Asia, while countering U.S. and Indian influence.

Pakistan, a Muslim-majority country of 200 million that has been battling an Islamist insurgency for over a decade, hopes the investment will spur its long-underperforming economy, which the IMF projects to grow 4.3 percent this year.

Xi was given a lavish welcome as he arrived on Monday morning at Nur Khan airbase in Rawalpindi, next to Islamabad, where he was greeted by President Mamnoon Hussain and Prime Minister Nawaz Sharif.

The two allies have enjoyed close diplomatic and military relations for decades, though economic ties have only grown more recently. Bilateral trade crossed $12 billion last year compared to only $2 billion a decade earlier.

“The real opportunity of this China Pakistan Economic Corridor is that it changes the scope of the relationship from geopolitics to geo-economics,” Ahsan Iqbal, the minister overseeing the projects, told AFP.

The project foresees the creation of road, rail and pipeline links that will cut several thousand kilometers off the route to transport oil from the Middle East to China, while bypassing mutual rival India.

The upgrade will stretch 3,000 kilometers from Gwadar on the Arabian Sea to China’s western city of Kashgar.

Pakistan transferred control of the port to a Chinese public company in 2013. Iqbal said $11 billion has been set aside for the corridor.

The two countries are also set to cooperate in gas, coal and solar energy projects to provide 16,400 megawatts of electricity—roughly equivalent to the country’s entire current capacity, said Iqbal.

Pakistan has wrestled with chronic power shortages in recent years that have scrubbed several points off GDP growth and inflicted misery on the everyday lives of its citizens. “These are very substantial and tangible projects which will have a significant transformative effect on Pakistan’s economy,” Iqbal said.

In Monday’s edition of daily The News, Xi said the two countries should align their development, trade and economic strategies more closely. And in keeping with the flowery rhetoric that usually accompanies China-Pakistan exchanges, Xi wrote that he felt like he was “going to visit the home of my own brother” on his two-day visit.

The projected investments, $28 billion of which are ready to be signed during Xi’s visit, dwarf a U.S. assistance package to Pakistan of $5 billion that was begun in 2010 but has not made as great an impact as hoped.

Referring to the U.S. aid, signed under the Kerry-Lugar-Berman Act (KLB), Iqbal said: “KLB was $1.5 billion per year, out of which only $600-700 million went to government. Most of it went to non-government sectors and the bulk went to American companies. That is a problem with assistance that comes through the aid mode.”

Iqbal was more optimistic about Beijing’s investment, saying it would integrate three engines of growth in the continent: South Asia, Central Asia and China.

Some analysts, however, have cautioned that the huge figures being trumpeted look too good to be true and the government will have its work cut out turning the infrastructure projects into reality—particularly in restive Balochistan province, where a separatist insurgency has raged for a decade.

“I just hope that Beijing’s big-ticket projects are matched by Islamabad’s clear commitment and action on the ground,” said Sherry Rehman, an opposition lawmaker and director of the Jinnah Institute think tank. “‎Executive stalemate in Islamabad can kill off the best projects from an ally like Beijing. So basically the Economic Corridor needs to be paved with more than good intentions from Islamabad.”

Beyond economic matters, questions of regional security will be high on the list during discussions between the two leaders. China is wary of the infiltration of militant Islamists from Pakistan to its western Xinjiang province which is frequently hit by unrest, and may be looking from greater assurances from Islamabad on the matter.

In February China expressed willingness to support the Afghan government in reconciling with the Taliban, another issue that could be discussed.