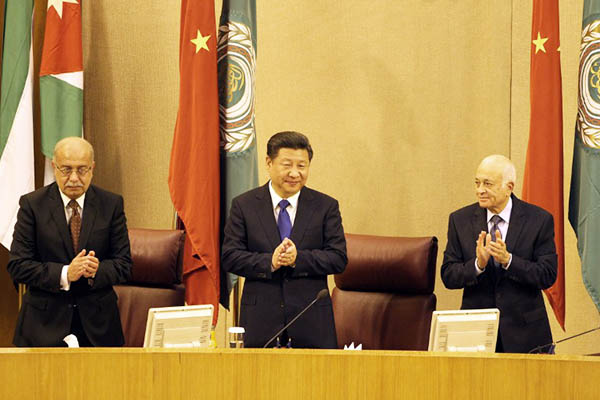 Chinese President Xi Jinping announced Thursday billions of dollars in special loans and investments in the Middle East as Beijing seeks to boost its economic ties and clout in the region.

Xi offered China’s financial support in an address to the Cairo-based Arab League after holding talks with Egypt’s President Abdel Fattah al-Sisi during his first tour to the Middle East as president.

Xi arrived in Cairo late Wednesday from Saudi Arabia and will travel on Friday to Iran, the last leg of his three-nation tour. Xi offered $55 billion in loans and investments to the Middle East.

“China will offer $15 billion as special loans for industrial projects in the Middle East,” he told the Arab League.

Another $10 billion would be provided as commercial loans to boost cooperation in the energy sector and an equivalent amount will be offered as preferential loans, he said.

Xi also announced the establishment of a common investment fund worth $20 billion for Qatar and the United Arab Emirates.

Beijing has long taken a backseat to other diplomatic players in the Middle East but analysts say the region is crucial to Xi’s signature foreign policy initiative—known as “One Belt One Road”—touted as a revival of ancient Silk Road trade routes.

China, the world’s second-largest economy, also relies heavily on oil and gas imported from the energy-rich Middle East. “We are not setting up proxies or building a sphere of influence in the region,” Xi told the Arab League.

Xi signed a slew of separate agreements with Cairo for undertaking projects in sectors like electricity, transportation and infrastructure. “The total investments in these projects would be $15 billion. These projects will offer a new impetus to the economic development of Egypt,” he said in a joint statement with Sisi.

Sisi said the agreements were the “best evidence of the two countries’ determination to improve their levels of cooperation.”

In an article in state-run newspaper Al-Ahram ahead of his visit, Xi expressed China’s backing for Egypt running its affairs without outside interference. “China supports the people of Egypt in making independent choices for the future of their own country,” he wrote.

Xi’s visit to Egypt comes just ahead of the Jan. 25 anniversary of the 2011 revolution that toppled longtime Egyptian autocrat Hosni Mubarak. Mubarak’s ouster was followed by unrest and a military overthrow of his Islamist successor Mohamed Morsi, the country’s first freely elected president, by then-army chief Sisi.

Later Thursday Xi was to visit the famed temple city of Luxor to attend celebrations marking six decades of diplomatic relations between Cairo and Beijing. His trip to Luxor is also seen as an attempt to lure Chinese holidaymakers to Egypt, whose economy is heavily dependent on revenues from the tourism sector.

In Saudi Arabia, Xi met with King Salman and oversaw the opening of a joint-venture oil refinery in the Yanbu Industrial City on the Red Sea.

Saudi Arabia is China’s biggest global supplier of crude. Few details have emerged of Xi’s talks with leaders in Riyadh but late on Wednesday the Saudi Press Agency reported that the two countries decided to establish a “comprehensive strategic partnership.”

During his visit to Riyadh, Xi had been expected to seek to ease tensions between Saudi Arabia, the region’s main Sunni power, and Shia rival Iran.

Saudi Arabia and a number of its Sunni Arab allies broke diplomatic ties with Tehran this month after protesters angry over Riyadh’s execution of a prominent Shia cleric ransacked Saudi diplomatic missions in Iran. Iran and Saudi Arabia back opposing sides in a range of Middle East conflicts, including in Syria and Yemen, and there are fears the row could derail diplomatic efforts to resolve them.

Xi was expected in Iran, just days after sanctions were lifted when Tehran implemented its historic nuclear deal with world powers. China, with the United States, Britain, France, Germany and Russia, was among the countries that reached the agreement with Iran in July to curtail its nuclear activities in exchange for ending international sanctions.