Chinese-American Was Targeted in Mountain Massacre 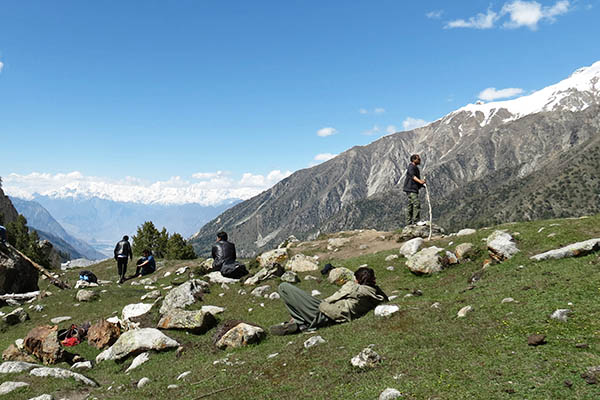 The attack at the base camp for Nanga Parbat was meant to secure a hostage to use as a bargaining chip.

The massacre of 10 foreign climbers on Pakistan’s ‘Killer Mountain’ a year ago came after a failed attempt to capture a Chinese-American to use him as a high-value bargaining chip, according to officials and militant sources.

The June 22 attack at the base camp for the 8,126-meter Nanga Parbat, Pakistan’s second-highest mountain, was the deadliest assault on foreigners in the country for a decade.

One year on, with tourism in the northern Gilgit-Baltistan region still suffering, most of the 10 suspects implicated in the attack are still at large, while sources close to the investigation have cast doubt on the guilt of some of those arrested. The victims were identified as three Ukrainians, two Chinese—including Chinese-American Chen Honglu—two Slovakians, one Lithuanian and one Nepalese as well as a Pakistani guide. But dual national Chen was the prime target, according to militant sources.

The story begins in early June 2013, when a local jihadist contacted other fighters to tell them two mysterious commanders had arrived from out of town and wanted to meet.

The Gilgit-Baltistan region, high in the Himalayas, has been relatively immune to the Islamist insurgency plaguing the country in recent years. But the remote area has served for decades as a nursery for fighters to wage war in Indian-administered Kashmir, as well as sectarian violence.

The men met at a house in the town of Chilas, where the two strangers, wearing burqas, were introduced as important Taliban cadres from Afghanistan. The local fighters were briefed on the planned Nanga Parbat operation.

“They were told that the mission was about kidnapping a foreigner in order to later bargain for the release of an important Taliban commander,” an investigator assigned to the case said. Militant sources said the Chinese-American was the specific target, with the plan being to trade him for Taliban in Afghanistan.

The men then met a local sectarian group in a forest, recruiting two more fighters—against the sectarian group leader’s wishes—to bring their number to 10. They left for the Nanga Parbat base camp in the early evening, wearing the uniforms of the Gilgit Scouts, a paramilitary police unit.

“The two burqa-clad commanders had taken off their burqas and were in military uniforms like the rest of us but their faces were covered with a cloth,” said a militant source, explaining that they were supposed to grab the target.

But as the attack unfolded in the freezing night, Chen burst out of his tent and tackled one of the militants using martial arts techniques. The militant, named Mujeeb, panicked and shot him, destroying the main purpose of the mission and infuriating the shadowy masked commanders.

The remaining climbers were then tied up and shot one by one. “It all happened because of Mujeeb,” said a local source, speaking on condition of anonymity. “The actual plan had been to kidnap a Chinese-American but his reaction led to the killing of himself and 10 others,” he said.

This account was corroborated by two officials from the team investigating the attack.

After the slaughter, the attackers walked for five hours to a remote village where they buried their uniforms and had breakfast before walking on to another village and dispersing.

Beyond Chen’s U.S. nationality it is unclear why he became such a valued target of the group. The 50-year-old studied electrical engineering at Tsinghua University in China, and worked for some time in California before returning to Shanghai, according to the Alpinist magazine.

In a video clip recorded by negotiators who met with him, Mujeeb owned up to the killing of Chen but told them he would not surrender because he acted in “self-defense.”

“What did you expect me to do, wait for him to kill me? I panicked and opened fire,” Mujeeb said on the video.

More than four months went by before authorities made their first arrests in the case. A total of 18 people were detained, of whom five are still in custody—but several militant sources say only one of them was involved in the attack, while the rest were forced to confess.

Mujeeb remains in hiding in the forests of the district, where from time to time he makes audio recordings of jihadist poetry that find their way to the markets of Gilgit.

Bashir Qureshi, a member of the negotiating team, said there were many grey areas in the case. “Nothing is clear, they have mixed up four different cases to give an impression that all the perpetrators have been arrested but the real perpetrators are still at large,” he said.