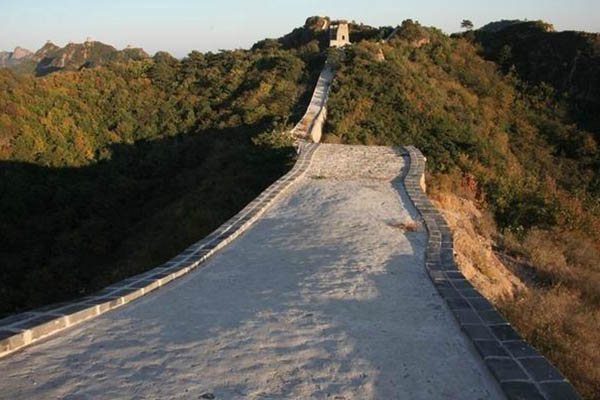 Uneven, crumbling steps have been replaced by flat-topped path, ruining the ‘wild’ beauty of site, according to critics.

Chinese social media users were in an uproar on Friday over restoration of a 700-year-old section of the Great Wall that has been covered in concrete, turning it into a smooth, flat-topped path.

Known as one of the most beautiful portions of the “wild,” unrestored wall, the eight-kilometer Xiaohekou stretch in northeast Liaoning province was built in 1381 during the Ming Dynasty. Photos posted online showed that its uneven, crumbling steps and plant growth had been replaced as far as the eye could see with a white, concrete-like cap.

“This looks like the work of a group of people who didn’t even graduate from elementary school,” said one user of China’s Twitter-like Weibo platform. “If this is the result, you might as well have just blown it up.”

“Such brutal treatment of the monuments left behind by our ancestors! How is it that people with low levels of cultural awareness can take on leadership positions?” asked another. “Why don’t we just raze the Forbidden City in Beijing, too?”

Even the deputy director of Liaoning’s department of culture Ding Hui admitted: “The repairs really are quite ugly,” according to state broadcaster CCTV.

The Great Wall is not a single unbroken structure but stretches for thousands of kilometers in sections from China’s east coast to the edge of the Gobi desert. In places it is so dilapidated that estimates of its total length vary from 9,000 to 21,000 kilometers, depending on whether missing sections are included. Despite its length it is not, as is sometimes claimed, visible from space.

Emergency maintenance was ordered for Xiaohekou in 2012 to “avoid further damage and dissolution” caused by “serious structural problems and issues due to flooding” and was completed in 2014, the State Administration of Cultural Heritage said in a statement on its website in response to public and media outcry.

The government body has begun an investigation into the approval, implementation and outcome of the maintenance work, stating that it would deal with work units and personnel found to be at fault severely, “without justifying their mistakes.”

Around 30 percent of China’s Ming-era Great Wall has disappeared over time as adverse natural conditions and reckless human activities—including stealing the bricks to build houses—erode the UNESCO World Heritage site, state media reports said last summer. Under Chinese regulations people who take bricks from the Great Wall can be fined up to 5,000 yuan, according to the Global Times, but plant growth on the wall continues to accelerate decay, and tourism, especially to undeveloped sections, also severely damages the world’s longest human construction.