Chopra, Jonas Set for India’s ‘Wedding of the Year’ 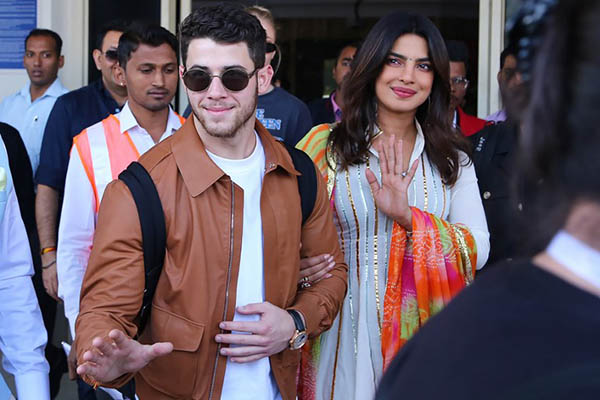 The superstar couple waved and smiled at photographers as they left the airport in India’s revered “Blue City” where they will tie the knot in a series of lavish ceremonies this weekend.

Chopra, 36, and Jonas, 26, are due to wed at the city’s opulent Umaid Bhawan Palace hotel, in the western desert state of Rajasthan, on Saturday. They have been joined in India by their families, including Jonas’s brother Joe and his fiancée, British actress and Game of Thrones star Sophie Turner.

Indian media is abuzz with details and speculation about the big day, as Bollywood buffs count down to the wedding of the year. “She’s one of the best actresses in India and she’s beautiful. All of India is excited for her wedding,” said one fan, Prakash Pujari, outside a cinema in Mumbai, the home of Bollywood.

Chopra, who won the Miss World pageant in 2000, is one of Bollywood’s most identifiable stars and one of the few to have achieved success in the West. She starred in the ABC thriller series Quantico and has released songs with U.S. chart-toppers including Pitbull and The Chainsmokers.

Jonas first found success as a child, as the frontman of The Jonas Brothers with his two siblings.

The brothers hailed from a deeply devout Christian family and presented a wholesome image, including wearing purity rings to promote chastity. In more recent years, Jonas remodeled himself with a more mature and edgy image, and has also turned to acting.

The couple got engaged in August, sharing photos on social media showing them performing a prayer ritual in traditional Indian garb.