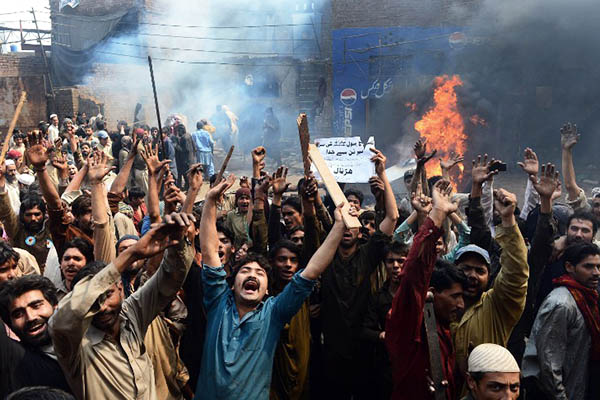 Sawan Masih has claimed before the court that blasphemy charges were fabricated to drive Christians off their land in Joseph Colony.

A Christian man sentenced to death for blasphemy appealed against his conviction Tuesday, saying the charges were trumped up to speed the eviction of minority Christians from their land.

Sawan Masih was convicted last week of insulting Islam’s Prophet during a conversation with a Muslim friend in the Joseph Colony neighborhood of Lahore in March last year. “We have filed an appeal in the Lahore High Court against the death sentence awarded to Sawan Masih and called for his acquittal and release from jail,” said his lawyer Naeem Shakir.

More than 3,000 Muslims rampaged through Joseph Colony, torching some 100 Christian homes in Pakistan’s second-largest city, after the allegations against Masih emerged.

Police had initially said they would investigate whether or not Muslim businessmen in the area may have instigated the violence with the aim of seizing Christians’ land, or to exploit the blasphemy allegations for political gain.

Shakir said the circumstances in which the incident took place cast “serious doubts” over the prosecution’s case. He added his client had told the court the blasphemy charges “were fabricated by the elements who wanted to occupy the property of Joseph Colony.”

Pakistan has extremely strict laws against defaming Islam, including the death penalty for insulting Islam’s Prophet, and rights campaigners say they are often used to settle personal disputes in a country where 97 percent of the population is Muslim.

A recent report from a U.S. government advisory panel said Pakistan used blasphemy laws more than any other country in the world, listing 14 people on death row and 19 others serving life sentences for insulting Islam. The country has had a de facto moratorium on civilian hangings since 2008. Only one person has been executed since then, a soldier convicted by court martial.

No man would be blasphemous in Pakistan specially from the minority community knowing what our mad crowds and courts would do.If fairly investigated we will find either personal enmity or property grabbing as the motive for the charges against the victim.Only an insane person could blaspheme.