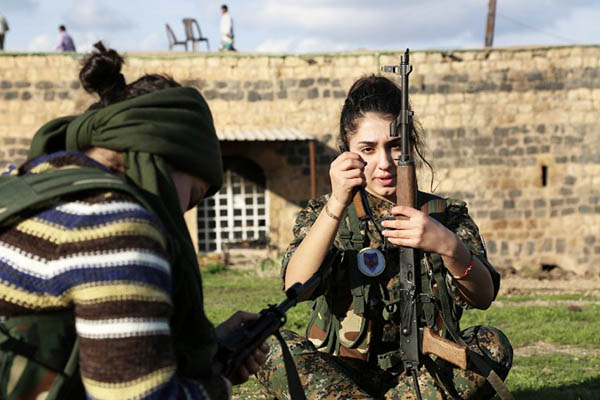 Babylonia has no regrets about leaving behind her two children and her job as a hairdresser to join a Christian female militia battling against the Islamic State group in Syria. The fierce-looking 36-year-old in fatigues from the Syriac Christian minority in the northeast believes she is making the future safe for her children. “I miss Limar and Gabriella and worry that they must be hungry, thirsty and cold. But I try to tell them I’m fighting to protect their future,” she told AFP.

Babylonia belongs to a small, recently created battalion of Syriac Christian women in Hasakeh province who are fighting I.S. They are following in the footsteps of Syria’s other main female force battling the jihadists—the women of the YPJ, the female counterpart to the Kurdish People’s Protection Units or YPG.

So far the new force is small, with around 50 graduates so far from its training camp in the town of Al-Qahtaniyeh, also known as Kabre Hyore in Syriac, and Tirbespi in Kurdish.

But the “Female Protection Forces of the Land Between the Two Rivers”—the area between the Tigris and Euphrates waterways historically inhabited by Syriacs—is teeming with women eager to prove their worth against I.S. It was actually Babylonia’s husband who encouraged her to leave Limar, nine, and six-year-old Gabriella and join the unit whose first recruits graduated in August.

Himself a fighter, he urged her to take up arms to “fight against the idea that the Syriac woman is good for nothing except housekeeping and make-up,” she said.

“I’m a practicing Christian and thinking about my children makes me stronger and more determined in my fight against Daesh,” added Babylonia.

Syriac Christians belong to the eastern Christian tradition and pray in Aramaic. They include both Orthodox and Catholic branches, and constitute around 15 percent of Syria’s 1.2 million Christians. Before the conflict began in March 2011, Christians from some 11 different sects made up around five percent of the population.

The unit’s first major action was alongside the newly created Syrian Democratic Forces, a coalition of Kurdish, Arab and Christian fighters, which recently recaptured the strategic town of Al-Hol. “I took part in a battle for the first time in the Al-Hol area, but my team wasn’t attacked by IS,” said 18-year-old Lucia, who gave up her studies to join the militia. Her sister also joined up, against the wishes of their reluctant mother.

“I fight with a Kalashnikov, but I’m not ready to become an elite sniper yet,” the shy teenager said, a wooden crucifix around her neck and a camouflage bandana tied round her head.

Al-Hol, on a key route between territory I.S. controls in Syria and Iraq, was the first major victory for the SDF, which has captured around 200 villages in the region in recent weeks. It has received air support from the U.S.-led coalition fighting I.S., as well as drops of American weapons.

Ormia, 18, found battle terrifying at first. “I was afraid of the noise of cannons firing, but the fear quickly went away,” she said. “I would love to be on the front line in the fight against the terrorists.”

The battalion’s fighters train in an old mill in a program that includes military, fitness and academic elements. With its limited combat experience, the unit for now focuses mainly on protecting majority Christian parts of Hasakeh province.

Thabirta Samir, 24, who helps oversee the training, estimates that around 50 fighters have graduated so far. “I used to work for a Syriac cultural association, but now I take pleasure in working in the military field,” she said. “I’m not afraid of Daesh, and we will be present in the coming battles against the terrorists.”

Samir said both local and “foreign forces” helped train the women, without specifying the nationality of the foreigners.

In late November, Kurdish sources said U.S. soldiers had entered the town of Kobane in northern Syria to train Kurdish fighters and plan offensives. Some women cited what is known as the Sayfo [‘sword’] massacres in 1915 of Syriac, Assyrian and Chaldean Christians as reasons for joining the unit. “We are a community that is oppressed by others,” said 18-year-old Ithraa. She joined four months ago inspired by the memory of Sayfo, in which Ottoman authorities are said to have killed tens of thousands of Christians in Turkey and Iran. She said the community hoped to prevent “a new massacre like that committed by the Ottomans… when they tried to erase our Christian and Syriac identity.”