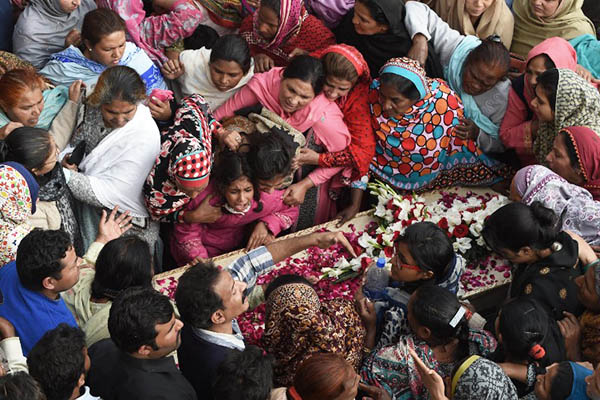 Interior minister says perpetrators of mob lynching will be identified through camera footage and placed under arrest.

Christians held funerals amidst tight security on Tuesday for the victims of twin Taliban suicide attacks that targeted churches two days earlier in the worst attack on the minority group in over a year.

Seventeen people died as a result of the suicide bombings in the Youhanabad district of Lahore, with more than 70 wounded. Two men were later lynched by an angry mob who suspected they were militants, though authorities Tuesday announced they were investigating claims by relatives of one of the men that he was an innocent shopkeeper caught up in the fracas.

The attack also sparked two days of rioting by thousands of Christians who clashed with water canon-wielding police, blocked roads and forced a partial shutdown of the city’s public bus system.

At least two Christians were also killed Monday when a panicked female motorist drove through a crowd of protesters, Interior Minister Chaudhry Nisar Ali Khan told Parliament Tuesday, revising an earlier figure of one death in the incident. Around a dozen people were also injured.

In the low-income Youhanabad neighborhood, home to more than 100,000 Christians, police and paramilitary Rangers were out in force preventing outsiders from entering. “We have deployed more than 5,000 policemen and paramilitary rangers,” said senior police official Haider Ashraf. Shops were closed as grieving residents made their way toward the burial grounds, while senior cleric Bishop Irfan Jameel appealed for calm.

“Please remain peaceful and carry on the struggle against terrorism by forging unity as a nation among ourselves,” Jameel said, adding that a memorial would be built to honor the “martyrs of Youhanabad.”

Punjab Home Minister Shuja Khanzada meanwhile said the government was hunting the culprits of the attack.

Also Tuesday, police said the family of one of the men killed by a mob had reported his death and said he was the owner of a glass-cutting shop and had no ties to the Taliban attack. “The family of the man, identified as Muhammad Naeem, said in an application that he was innocent and he had no link or a role whatsoever in the attacks,” said city police chief Amin Wains, adding his force was investigating the matter.

Interior Minister Khan meanwhile vowed to bring the perpetrators of the mob killings to justice. “Burning two people alive and damaging public property is also… [a] form of terrorism,” he said. “All those who have done this will be identified through the video footage and will be arrested.”