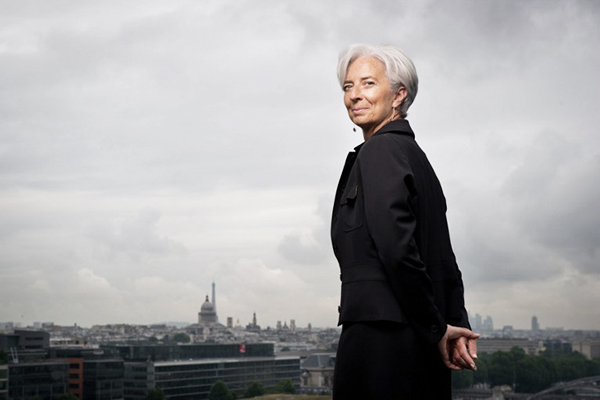 IMF chief spared fine or prison sentence and will continue as head of global body.

A French court on Monday found IMF head Christine Lagarde guilty of negligence over a massive state payout to a tycoon when she was French finance minister, but she will continue to lead the fund.

Lagarde was spared her a fine or prison sentence, and the International Monetary Fund board meeting in Washington said it retains “full confidence” in her ability to continue to lead the organization. Speaking to reporters in Washington, Lagarde said she was not happy with the court ruling, even though she faces no penalty, but would not appeal.

“I am not satisfied, but there comes a point in time when one just has to stop, turn the page, and move on and continue to work with those who have put their trust in me,” Lagarde said, calling the process a “painful” one.

A special court in Paris found against Lagarde over her handling of a dispute between the state and flamboyant businessman Bernard Tapie, which ended in a 404-million-euro award for Tapie. The court rapped Lagarde for failing to contest the massive payment, which was linked to Tapie’s sale of the Adidas sportswear brand to Credit Lyonnais bank.

However, the court exempted her from any penalty, citing her “international reputation” and the fact that at the time of the events in 2008 she was busy fighting a global financial inferno.

The high-flying 60-year-old former corporate lawyer became the first female IMF chief in 2011, succeeding her disgraced compatriot Dominique Strauss-Kahn. And despite her legal troubles she was reappointed in February to a second five-year term. The IMF executive board, which represents the 189 member countries, met on Monday in the wake of the court decision, and said it “reaffirms its full confidence in the managing director’s ability to continue to effectively carry out her duties,” and will continue to work with her “to address the difficult challenges facing the global economy.”

The French government expressed continued support for Lagarde, saying it “retained its utmost confidence in her capacity to carry out her responsibilities.”

U.S. Treasury Secretary Jacob J. Lew issued a statement of support immediately after the IMF board decision, calling her “a strong leader of the IMF” and praising “her ability to guide the Fund at a critical time for the global economy.”

Lagarde was tried over her decision to allow the long-running dispute over Tapie’s sale of Adidas to be resolved by a private arbitration panel instead of by the courts, and her failure to contest the staggering amount of the resulting award. An investigation later showed the arbitration to be fraudulent.

Tapie, who was later ordered to pay back the money, is among six people charged with fraud in a separate criminal case, along with the boss of Orange telecoms company, Stephane Richard, a former aide to Lagarde.

Lagarde’s case was heard by the Court of Justice of the Republic—a tribunal of judges and members of parliament that hears cases against ministers accused of wrongdoing in office. The punishment for negligence theoretically carried a one-year prison sentence and a 15,000-euro fine.

Lagarde told the court during her five-day trial last week she had acted in good faith. “My sole aim was to defend the general interest,” she said, a sentiment she repeated in her statement in Washington.

The court noted however that her inaction allowed Tapie and his wife to pocket 45 million euros in “moral damages” for alleged emotional harm.

Lagarde’s voice cracked with emotion as she said on Friday that the case had put her family—she is the mother of two sons—through a “testing” time.

Prosecutor Jean-Claude Marin had described the evidence as “very weak” and said he was opposed to a guilty finding. Coming in the middle of the global financial crisis, the payout to Tapie, a supporter of Lagarde’s then boss, ex-president Nicolas Sarkozy, caused shock in France.

Tapie had sold Adidas to Credit Lyonnais for the equivalent of 315.5 million euros in 1993. The bank sold it on the following year for 701 million euros, prompting claims from Tapie that he had been cheated.

Lagarde, who was a relative newcomer to government at the time, told the court she had been busy with the financial crisis and that the arbitration process was “not a priority” at the time. “The risk of fraud completely escaped me,” she said.

Lagarde has won plaudits for her performance as IMF managing director and has been a key player in bailout negotiations for Greece. She has also worked to reform the U.S.- and Europe-dominated institution to reflect the growing global economic power of big emerging market economies, especially China.

Her trial landed the IMF back in the headlines for alleged wrongdoing by its bosses, five years after Lagarde was chosen to succeed Strauss-Kahn when he resigned to fight sexual assault charges. His case was later dropped and a civil case was settled out of court.