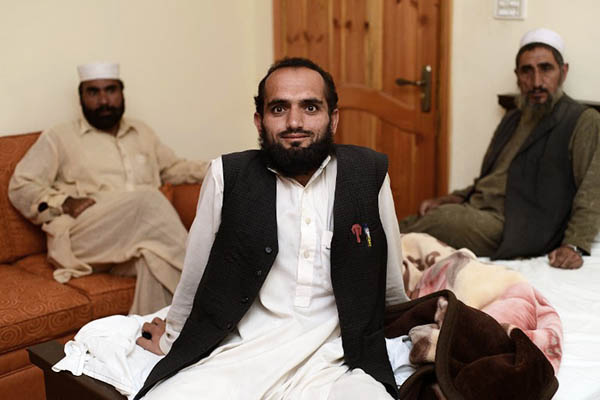 Kamil Shah, who was detained at Bagram for five years. Farooq Naeem—AFP

Kamil Shah says he does not expect any kind of compensation from the U.S. for their brutal treatment of him at Bagram.

A Pakistani detained at Afghanistan’s infamous Bagram jail, where he was beaten and threatened with dogs, says a damning U.S. report on the brutal treatment of terror detainees will do nothing to return the five years he lost to the ordeal.

The detention center north of Kabul, once dubbed the Afghan Guantanamo Bay, became highly controversial for the way detainees were treated. The U.S. Senate report revealed grim details about how prisoners were treated at so-called “black sites,” facing torture ranging from rectal feeding to being suspended from ceilings by their wrists. At least one inmate died after prolonged exposure to hypothermia at one such site known as “Salt Pit,” in addition to two already documented deaths in Bagram.

Former inmate Kamil Shah told AFP the report, which has triggered worldwide condemnation, was little comfort for the five years he spent in Bagram. “What’s the benefit of the report? Will the U.S. compensate the victims?” Shah said by telephone. “They arrested innocent people, put them in dark cells and tortured them for five, 10, 15 years and now they are saying they were wrong.”

The Afghan authorities took control of Bagram, renamed Parwan, in March 2013, but the U.S. retained control of foreign prisoners, worried the Afghans might release them back onto the battlefield.

Shah said that in 2004, aged 17, he crossed into Afghanistan to seek treatment for a sick friend in Kandahar, the heartland of the Taliban. But on his way there he was arrested by American forces. They did not believe his story and he was thrown into Bagram as a suspected Taliban or Al Qaeda militant, though he was eventually released with no charges and nothing tying him to suspected wrongdoing.

Shah’s time at Bagram consisted of a mixture of violent and non-violent forms of torture, he recalled, ranging from being locked in a pitch-black cell for days on end to being beaten until his interrogators were exhausted. “They used to beat me for hours with sticks and guns, they would go on beating me until they got exhausted,” he said. “Sometimes they would interrogate me for nine, 10 hours, that was the most horrible thing.”

He claimed that interrogators used wires to give him electric shocks. “They would bring dogs and threaten me that if I didn’t tell the truth they would throw me to the dogs,” he said.

Both Pakistan and Afghanistan, as U.S. allies, aided in the rendition of suspects. In his autobiography, Pakistan’s former military ruler Pervez Musharraf said the CIA paid Pakistan millions of dollars for handing over hundreds of Al Qaeda prisoners.

“I was tortured by Americans, Afghans and Pakistanis for no reason, my life has been ruined. What good will the report do?” Shah said. After his release Shah was required for several years to notify the police whenever he wanted to leave his village. With no qualifications and no job, he struggles to get by and says he wishes he could clear his name.

“I am waiting for justice, let’s see how the U.S. report compensates the hundreds of detainees but I am not very hopeful about it,” he said.