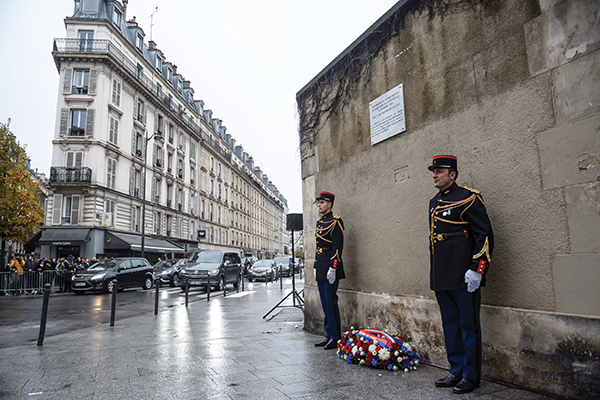 Learning to live with dread, from Paris to Karachi.

The Feb. 17 suicide bombing of the Lal Shahbaz Qalandar shrine in Sehwan, Sindh, like the recent string of terrorism in France—starting, after a lapse of almost two decades, with the January 2015 attack on Charlie Hebdo and a Parisian Jewish supermarket—strikes at the heart of what the French call “vivre ensemble” (living together).

The November 2015 coordinated attacks in Paris, including at the Bataclan and various sites emblematic of Parisian nightlife, left 130 dead. This was the deadliest incident of political violence in France since World War II. Then, there was last July’s Bastille Day truck rampage in Nice, which killed 86. Identification with the victims, especially among the age bracket of 20-40, was facilitated by the randomness of the killings. Many couldn’t avoid thinking, “It could have been me.”

A week after the November attacks, Le Monde tried to assess their impact on Parisian everyday life. “Living with Fear, a New French Problematic” tried to map out Parisians’ arrangements with what seemed to be an increasingly dangerous environment. While the tone of the piece was over-determined by its immediate context—emotions were still running high and the fear of new attacks had not yet receded—it had the merit to raise an uncomfortable question: Was fear about to become a way of life in Paris and other French agglomerations confronted to a renewed terrorist threat?

The answer requires a detour through the world’s most fear-inspiring cities—those regarded by their residents as dangerous in terms of everyday occurrences. Take Karachi, Pakistan’s largest and most volatile city: here, for the last three decades, political, criminal and sectarian violence has been contributing conjointly to a climate of pervasive fear that permeates life, lurking under the surface of apparent normality.

The prolonged exposition of Karachi’s populations to multifarious and overlapping forms of violence has endowed battle-scarred Karachiites with a set of survival skills that allow them to navigate their volatile environment with at least a relative sense of confidence. In Karachi, as in other situations of protracted armed conflict, fear has indeed become a way of life—a chronic condition that frightened individuals and communities try to contain through collective interventions or more personal routines aiming to reduce everyday threats.

The resurgence of terrorism as well as public calls to vigilance have certainly made Parisians more attentive to their surroundings, inciting them to detect potential threats and to identify possible emergency exits while circulating across crowded public spaces. In the aftermath of the Nov. 13, 2015, attacks, many Parisians feared that suicide bombers could target the metro. According to the local press, some women commuters then started swapping their pumps for running shoes, so as to be prepared for any eventuality.

These monitoring techniques and survival skills remain rather rudimentary compared to those of Karachiites, who have become used to mine just about everything in their environment for hidden, ominous meaning. The nature of the terrorist threat in France is not particularly conducive to such divination skills as it takes the shape of an unpredictable enemy seemingly determined to strike at random, without any spatial, social or temporal consistency. On the contrary, in Karachi, the concentration of violent incidents on some hotspots, as well as the recurrent and standardized nature of many episodes of urban violence—such as the incidents associated with strike calls, religious festivals, and days of mourning for “martyred” political or religious leaders—has endowed local populations with a certain flair and a capacity to act preventively so as to minimize damage to life and property.

Resilience and Its Blind Alleys

Echoing many reports on Karachi (and Pakistan), the gradual resumption of their everyday routines by Parisians after the November attacks was celebrated in the French and foreign media as a form of “resilience.” Battered and bruised, yet defiant and undeterred, the brave people of Paris would have abided by their city’s motto, “Tossed but not sunk.” In Paris, as in Karachi, however, the rhetoric of resilience gives cause to serious criticism.

In the strict meaning of the term (in physics and ecology, that is), resilience suggests the return of an object or an ecosystem to its original state after a shock or a perturbation. All too often, this is how the term is understood in media accounts, which tend to brush aside the legacy of the crisis as they celebrate collective adaptation skills—even where there really isn’t any alternative to such collective “recovery.”

Psychological elaborations of this notion focus on the ability of some individuals to bounce back and resume a “normal” life after a traumatic event. This understanding of the term remains highly contested. For psychiatrist Didier Cremniter, head of the Cellule d’urgence médico-psychologique de Paris (CUMP), this notion is “too simplistic.” It is merely “a label pinned on recovering patients” which obfuscates the social and political components of this recovery. For this specialist of psychic injuries, the personal history of those exposed to war or terrorism, as well as the qualification of their experience by the local society and political authorities, is crucial to their trajectory in or out of victimhood. For those labeled as victims, conditions of access to psychological counseling play a vital part in their recovery—an outcome which is also tributary to local expectations about “normality.”

The recent popularization of the notion of urban resilience by international organizations is equally problematic. The capacity of “resilient cities” to tackle potential disasters, especially of the environmental kind, has become a key element of their competitiveness. By shifting the focus from urban vulnerabilities to capacities of resilience, this global discourse tends to suggest that disasters of various kinds and proportions are somewhat inevitable and that, instead of trying to reduce risks, public policies should merely limit the damage. This fatalism can even become an excuse for state disengagement, leaving to “resilient” societies the responsibility of getting back on their feet.

What the notion of resilience also misses is the discrepancy, if not the conflict, between personal and collective attempts to cope with traumatic events. Following the November attacks, CUMP provided some form of counseling to 5,000 Parisians. CUMP finds its main inspiration in war psychiatry and tries to intervene early on so as to prevent the development of post-traumatic stress disorder. Cremniter says most patients were reluctant, so the counseling was done outside hospitals, in neighborhood town halls, and, in the case of bereaved families, at the École Militaire. Many were still in shock but were expected by their entourage and society to “turn the page” swiftly.

Popular commemorations of the tragedy sometimes rubbed salt into these patients’ wounds. “We would like to move on and it would be easier if these memorials weren’t there,” said a resident of a building overseeing the Bataclan who witnessed the carnage. “It is not only a visual reminder. There is also the atmosphere, the state of mind of the people who come here to mourn. It is really heavy.” Another resident had a different opinion: “I walk in front of these memorials every day. Behind every anarchic and watered-down altar, ghosts are lurking. It is both sad and appeasing.”

Even as the sense of dread after terrorist attacks tends to be receding, the response of public authorities sustains more diffuse sentiments of insecurity. The proclamation of a state of emergency might facilitate antiterrorist operations, but it also has perverse effects. Widely publicized police raids in France reinforced suspicions against Muslims at large among the French public—an ominous trend that could be contributing to the rising political fortunes of Le Pen’s rightwing Front National party.

The routinization of fear, or more precisely the diffusion of chronic feelings of insecurity, sometimes proceeds more insidiously. In the aftermath of the November attacks, new placards started appearing in public places, providing guidelines about “What to do in case of a terror attack.” Like the posters urging subway commuters to be “Attentive together!” these new safety guidelines promote the coproduction of security between the state and its vigilant citizens by encouraging the latter to report any suspect item and behavior to the police—an injunction which is bound to fuel further anxieties and mistrust among the public, at a time when collective bonds are already under severe stress.

In France, the presence of the military in public spaces (train stations, shopping malls, tourist spots, places of worship) has increased, while cafés, music venues and universities have all toughened up their security. A state of pervasive fear is still clearly perceptible in the French capital. “This climate of mass fear is now primarily sustained by the public response to the attacks,” says sociologist Laurent Bonelli, a specialist in the history of (in)security in France. This “government of fear” did not pick up in a day: “Over the years, the French have been tolerating ever more stringent security measures.”

The paradox of this race for security is that it only nurtures feelings of greater insecurity. Pakistan is not the only place in the world where pyromaniac firemen have a promising future.

Gayer is the author of Karachi: Ordered Disorder and the Struggle for the City. He lives in Paris. From our Feb. 25 – March 11, 2017, issue.

Pakistan is not the only country where Terrorism exists.
However, Pakistan has much to blame itself, since it has trained, equiped and financed terrorists, as an extension of its power projection. Some of these snakes(terrorists) have fallen out and are now biting the very hand which fed them.
In France, India, afganistan, UK, USA, innocents are killed due to the folly of countries like
Pakistan, who breed such snakes.