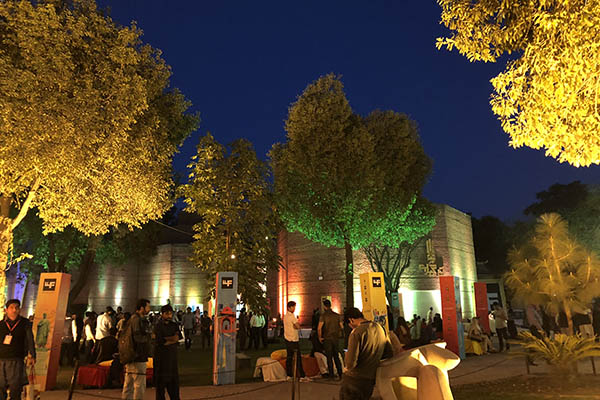 The Alhamra Arts Center in Lahore is lit up for LLF 2018. Courtesy LLF

In the garden city of Lahore, the modern spirit and ancient history of Pakistan come together. In February, activists, writers and artists converged on the city alongside star guest Orhan Pamuk to present the 8th Lahore Literary Festival, LLF2020—a celebration of the Enlightenment after the years of terror.

The old Anarkali Bazaar in the ‘inner city’ seems to be extinct one evening in mid-February. The traders are on strike and they are angry. The state is broke. But instead of raising taxes on the rich, the government is asking the poor to pay even more in the form of indirect taxation—and is urging everybody to pay taxes in full now.

“Business as usual in Pakistan,” grins Nawaz Bazit. In his late forties, he wears a light blue shalwar kameez, Pakistan’s traditional dress. His hair has thinned to a thin wreath, and when he went on pilgrimage to Mecca three months ago, Bazit promised Allah and his wife to lead a more pious life.

Bazit is sitting in front of his gallery of handicrafts on Davis Road in Garhi Shahu, in the center of the old city right next to the television studios of Geo TV. He sells fine fabrics and antiques. One of his brothers lives in Canada, another in London. Bazit says he knows the world.

His shop is the sole brightly lit reference point on the entire street. Bazit expects merchants from Kashmir. They bring new goods, from Muzaffarabad, the Pakistan-administered part of the disputed region, but also from Srinagar in the part held by India. “Merchants always find ways to each other when politics fails,” he smiles.

Bazit is right. In this wondrous corner of Pakistan, where cultures and religions from all directions come together, the variety of influences has always shaped Lahore. It is only 30 kilometers to the west of India. To the north, Kashmir soon begins, the enchanting mountainous landscape with its lovely meadows, green valleys and clear rivers, about which Pakistan and India are bitterly fighting. 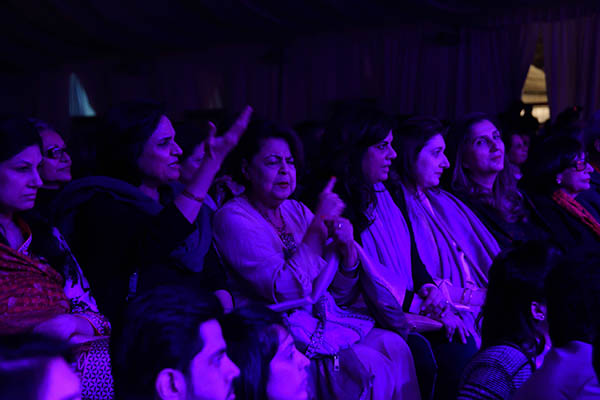 It is no coincidence that Pakistani cultural aficionados founded a literary festival here of all places. Since the Mughal Empire in the 16th century, Lahore has been a place of parks and poets. “We just had to revive it,” writer Ahmed Rashid explained to me later. He is one of the initiators of the festival. The Cambridge-educated author of the bestseller Taliban became famous overnight worldwide after the attacks on the Twin Towers in New York on September 11, 2001.

Eight years ago, when Rashid and his friends invited authors, artists and activists to the inaugural edition of the LLF, terror in Pakistan was still making headlines. You could say that extremists had taken the soul of the country hostage. The beauty that has always existed here, despite the poverty, was buried under the blood of terror.

The modern, contemporary texts of the writers at the festival, read in public, shone like a torch in the darkness in those oppressive times. Authors from all over the country spoke openly about the fear, the lies and the double standards in politics. It was a mutual assurance, a reality check. Basically, everyone knew why things had turned out the way they did.

“Our forum is a platform for freedom of speech in Pakistan, at a time when a predominantly young population claims to be heard and to bring about change,” says festival founder and CEO Razi Ahmed.

In 2016, the fourth year of the LLF, fanatics were still killing people of other faiths in Lahore. Christians were celebrating Easter mass at a local church when suicide bombers took 70 believers with them. The vast majority of people here remained gentle and friendly, as a result, despite the violence. Islam in Lahore has always been moderate and dominated more by spirituality than by rigid fundamentalism. 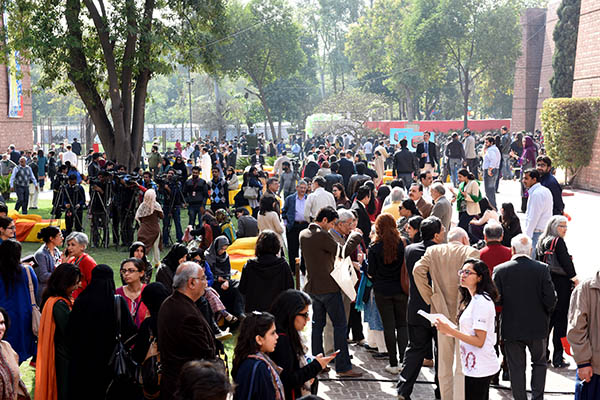 In the meantime, the Army slowly regained much of its control over the country. The fear of terror has now largely evaporated. The British Guardian, writing in 2016 about the literary festival in Lahore, noted that it was “a safe place for dangerous ideas.”

Amid this peace, stars of world literature reached Lahore in the third week of February—many of them for the very first time. Nobel laureate Orhan Pamuk was the star attraction, and drew packed crowds for his two sessions. Celebrities such as Oyinkan Braitwaite from Nigeria, Romesh Gunesekera from Sri Lanka and the British-Pakistani author Sabyn Javeri were among the dozens in attendance.

Back at Bazit’s shop, he is now making sweet, black tea. He says he has opportunities to live in the West, of course, but there are so many more good reasons to stay here. “Get in,” he says, holding open the door of his old Peugeot, parked in front of the shop.

At home he asks Fatima, his wife, to put on a nice dress and come out with us. His house has a garden, high walls and seven rooms. “Would I have a house like this if I lived in London?” asks Bazit while we wait for Fatima.

On the floor stands a cage made of bamboo. Inside it sits a grey-feathered bird. Bazit says it is a rare species that is only found in the border areas of Afghanistan, in Paktika. The bird senses when a curse is carried into the house, he says. Then it dies. The animal is something like an alarm system for negative vibrations, says Bazit.

That too belongs to Lahore. Mystics and famous fortunetellers can be found everywhere here, both serious and less serious. Most people here, no matter what religion they belong to, believe that there is more between heaven and earth than we understand. 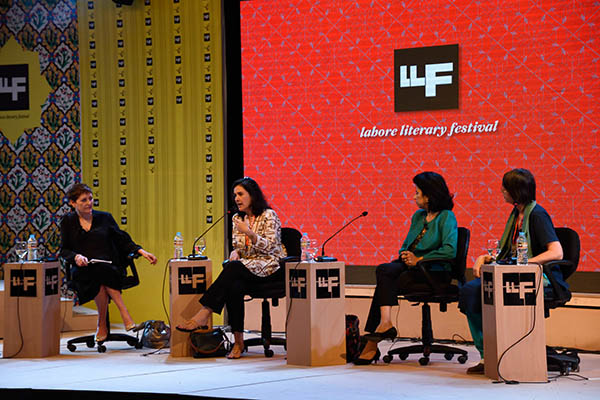 Many Sikhs and Hindus have their temples in Lahore—several of them within walking distance of the old mosques, with elaborate mosaics and paintings, white and golden towers and domes, that tower up in the old Mughal city. In the holiest place of the Sikhs, Gurdwara Dera Sahib, the remains of the 5th Guru of Sikhism, Guru Arjan Dev, are believed to be buried. It is located next to the impressive Lahore Fort and the Badshahi Mosque. People of all religions are welcome in the places of worship. Strangers are welcomed with wreaths of flowers and lassi, a refreshing yoghurt drink.

Now Bazit, his wife Fatima and I drive through the city, along the green avenues that line the canal. During the day, the trees cast pleasant shadows. We walk through the labyrinth of narrow alleys, which always lead to new paths. At some point they end in inviting inner courtyards with huge tendrils that swell from the height in lush green, and artistically carved flower arches and benches. 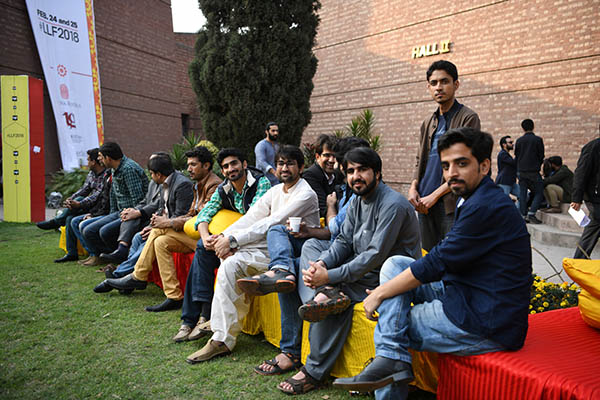 Bazit says that Lahore is rightly called the city of gardens. There are 23 large parks like the Bagh-e-Jinnah with its old-grown trees and the botanical garden. There are also smaller ones like the Zaman Park, a green roundabout on the canal, framed by high hedges and proud villas. The current prime minister and former cricket star Imran Khan grew up in Lahore. He scored his first runs in Zaman Park.

At the end of our tour, Bazit parks his Peugeot in the so-called Food Street. The alley looks a bit like the oriental version of the Reeperbahn, the walking street of Hamburg, Germany. Heera Mandi, the ‘Diamond Market,’ is the historic red light district of Lahore. The houses here are decorated with lamps and projecting wooden balconies. Behind the entrances, stairs lead up to roof terraces with open-air restaurants. From there the visitor can overlook the whole city. 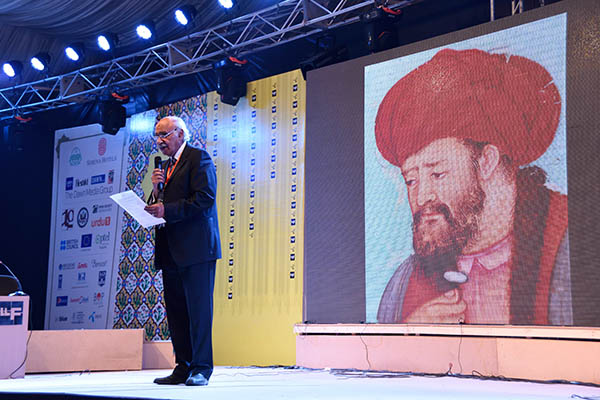 The skyline of the illuminated minarets and domes looks like a story from 1,001 Nights. A nearby musician sings of the beauty of his worshippers and concludes that in Lahore you can really find everything the world has to offer. Bazit has tasted it, he says—until he recently returned from Mecca and began a godly life. “Maybe you just got older,” Fatima sighs and lifts her glass of a colorfully decorated, naturally non-alcoholic cocktail, the house specialty.

Koelbl is a correspondent for the Foreign Desk of Der Spiegel. This article was originally published in German and has been translated into English for Newsweek Pakistan