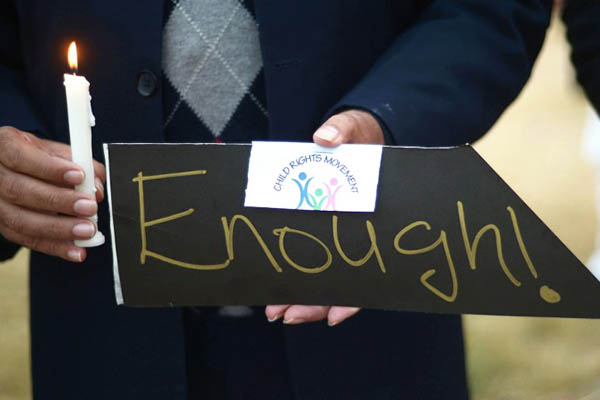 Maulana Abdul Aziz had refused to condemn the Peshawar school attack in a TV appearance.

Islamabad police on Thursday halted a protest organized by Pakistan’s civil society against the pro-Taliban statements of the head cleric of Lal Masjid, allegedly because it ‘went beyond limits.’

“I was shocked to see police so biased toward Lal Masjid when we tried to protest against the chief cleric of Lal Masjid for not condemning the Taliban siege in Peshawar,” said Naeem Mirza, one of the dozens participating in the protest. “We had gathered for a candle-lit vigil to show our solidarity with the victims of the Peshawar school attack in which over 140 children died,” he added. “After a two-minute silence, we started chanting slogans against Maulana Abdul Aziz, the chief cleric, who refused to condemn the attack during a TV appearance.”

Abdul Aziz, the chief cleric of Lal Masjid, was arrested in 2010 following a military operation of the radical mosque. Students of the madrassash attached to the mosque had set up “morality police” and had expressed support for jihad in the heart of the federal capital, prompting the government to take action and resulting in over 100 deaths. Commenting on the Peshawar massacre of schoolchildren at the hands of the Taliban, the cleric refused to condemn the militants, adding that the military and Taliban are ‘brothers’ and should unite.

Waseem Ahmed, a social activist, said Taliban apologists like Aziz should not be allowed to continue spreading their messages of hate. “Why are such elements moving freely in Pakistan if they have no belief in Pakistani law or the Constitution?” He said that every citizen of Pakistan had the right to demand the government arrest people who did not consider the siege of the Army Public School in Peshawar a terrorist act.

Maulana Abdul Rehman Muawiya, the general secretary of the sectarian Ahle Sunnat Wal Jamaat group, has filed an FIR against the protesters with Islamabad police. “Once we learned that a few hundred protesters were trying to harass the management of Lal Masjid, we rushed to the spot and filed an application against the protesters for wrongly implicating [Maulana Abdul Aziz] in the attack on the Peshawar school,” he said. “They [protesters] hurt public sentiments by creating disturbance in the capital,” he added.

According to the ASWJ leader, if they hadn’t reached the spot, there could have been clashes between the students of Lal Masjid and the protesters. “This would not be acceptable to the nation,” he added, claiming their actions were solely intended to maintain the peace.

On Friday, protesters reached the site again, resulting in police arresting a few activists for “disturbing the peace.” Interior Minister Chaudhry Nisar Ali Khan ordered the immediate release of the arrested protesters, according to local media. Activists on social media have pledged to continue the protest despite the police action and threats of retaliation by Lal Masjid supporters.

If it is bad to impose Shariah on gunpoint then It is equally bad to change ones personal views on gunpoint. Let us have endurance for different public opinions and do not suppress freedom of expression.

The universe has been trying to tell Pakistan something for a long time now and we’re finally ready to listen – the tragedy is it took the cold-blooded massacre of 141 innocent schoolchildren for us to reach this point. This is the change we need. Down with this cross-dressing nutjob cleric, the protestors need all the support

Freedom of speech in Pakistan.. …It’s a news to me? Then why they hang people who are against Prophet and Islam. .?